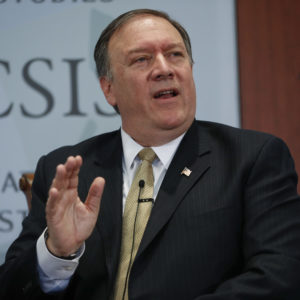 Secretary of State Mike Pompeo has compounded the debacle of his weekend in Pyongyang by a plea that North Korea partake of the same “once unimaginable prosperity and partnership we have with Vietnam today.”

Pompeo, on a tour that took him from Pyongyang to Tokyo to Hanoi to Kabul and Abu Dhabi before winding up with President Trump at the NATO summit in Brussels, overlooked history.

Vietnam emerged as a united country after communist forces from “North” Vietnam defeated the U.S.-backed “South” Vietnam regime in April 1975. Was he suggesting that maybe North Korea could emerge as a great country if the North Koreans overran South Korea and united Korea under Kim dynasty rule?

Obviously not, but the reference to U.S. ties to the communist government in Hanoi was more than a little disturbing to those who lived through the terrible Vietnam War. Vietnam, under communist rule, did not reform economically for more than a decade after the victory of the forces from the North.

Under communist rule, Vietnam is still repressive, closed to political opposition or free-thinking criticism while free enterprise, including foreign investment, flourishes. U.S. ties with this communist government have grown in response to China’s takeover of the South China Sea, where the Vietnamese have had to abandon their quest for undersea gas and oil reserves.

The Americans are dreaming if they think Kim Jong-un is about to follow the Vietnamese example. He’s counting on his Chinese big brother to disregard U.N. sanctions and send in the oil, food and other vital supplies needed to keep his regime on life support. If any country is worth emulating, aside from China after years ago doing away with the hard-line nonsense of Mao Zedong, it would be South Korea. Far more than Vietnam, the South has turned into a powerhouse built on free enterprise.

It’s not difficult to find fault with the South Korean system, with economic inequities, with domination of the economy by the chaebol, but South Korea stands as a shining example of success compared with North Korea’s record of stark poverty enforced by profligate investment in useless nukes and missiles.

Interestingly, Pompeo tried to persuade the North Koreans to be like the Vietnamese after the North Koreans had thrown cold water over his notions of getting them to take the first baby steps toward denuclearization. The North’s categorical rejection of whatever he was suggesting was definitive and humiliating. Yes, we all know North Korea is not going to give up its nukes, but did they have to make it so blunt, so plain, so embarrassing? Kim Jong-un is not taking the bait of American economic largesse predicated on concessions he will never make.

South Korea leader Moon Jae-in, however, has too much at stake to reverse himself and tell the Americans it’s time to resume war games. And Trump, having been thoroughly conned by Kim at Singapore and shaken hands on a statement that meant less than nothing, will keep on looking for the silver lining in the storm clouds. If Kim’s goal was to buy time while re-stoking his economy and recovering from collapse of parts of a mountain and the deaths of who-knows-how-many people in the seventh and last nuclear test last September, he’s succeeded admirably.

While Kim chose to visit a potato farm rather than see Pompeo, Moon was courting India, Asia’s other giant. India may not be nearly as powerful as China, but the South can still play one against the other, building up joint ventures, increasing trade and investing in the India economy as a counter to Beijing’s hold over North Korea and attempts to intimidate the South.

That’s why Moon shook hands with Lee Jae-yong, Samsung heir, at the opening of a smartphone plant south of New Delhi. Never mind that Lee not long ago got out of jail on a suspended sentence after having been convicted for bribery that led to the downfall of Park Geun-hye. Hyundai sedans, off a Hyundai line near Chennai, compete on Indian roads while Mahindra Motors introduces new models at Ssangyong Motors, taken over seven years ago.

Pompeo, by citing Vietnam as a role model for North Korea, conjured unpleasant memories. India is quite different. North Korea and India have historic diplomatic relations. In the quest for inter-Korean rapprochement, Moon and Kim Jong-un might agree on the potential of India, the other Asian giant, as a foil against China.

India may never rescue either North or South Korea in war but thrives on capitalism that the North would do well to emulate if Kim is more serious about economic reform than he is about denuclearization.