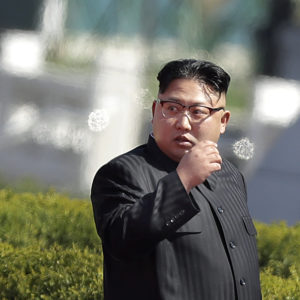 The failure of Pompeo’s mission to Pyongyang, and then his stopover in Beijing on the last leg of his Northeast Asian tour, was evident in the polite double-talk with which they addressed the whole issue of getting North Korea to get rid of its nuclear warheads and long-range missiles as well as the facilities for producing and launching them.

Rather than announce any specific details of the three and one half hours that he spent with Kim, Pompeo said both of them believed they had made “real progress” and that Kim and Trump could make “substantive progress” when they meet again.

Those vague words suggested they had actually gotten nowhere. Indeed, they also failed to agree on a time and place for the next summit, as Pompeo indicated when he said in the same sentence that the summit would occur “at a time that works for each of the two leaders and at a place that works for them.”

The North Koreans appeared equally anxious to put the best face possible on what may be insurmountable differences. The North’s Korean Central News Agency put out a report saying that Kim was confident that he and Trump would meet “sooner or later” and work out all the issues that are still unresolved since they agreed vaguely on “denuclearization” at their summit in Singapore in June.

The KCNA report appeared as an exercise in double talk in which Kim expressed “the belief that the dialogue and negotiations” between the leaders of the two countries “would continue to develop favorably.” Eventually, said KCNA, these two would come up with “a good program.”

In other words, it was obvious Pompeo and Kim had agreed on nothing, including the definition of a “good program.” The assumption, however, is that North Korea is sticking to its demand, supported by South Korea’s President Moon Jae-in, for a “peace declaration” in place of the truce that ended the Korean War. The North also insists on an end to sanctions imposed by the U.N. Security Council and the United States in retaliation for a series of nuclear and missile tests.

North Korea has not exploded a nuclear warhead or test-fired a long-range missile since last year, but the United Statres is sticking by its demand for denuclearization before acceding to these demands. Pompeo is assumed, very carefully, to have repeated the U.S. position in his meeting with Kim while leaving the door open to the chance for Kim to talk everything over with Trump.

At the same time, Kim did make a few meaningless concessions, saying the test site at Pungye-ri, which the North blew up last May in the presence of journalistic observers, could be opened to serious inspection by experts. The site is thought to have been virtually destroyed in the North’s last nuclear test last September, in which a number of people also are believed to have been killed.

Kim also reportedly said inspectors could take a look at the site at Tongcghang-ri near the Chinese border where North Korean engineers have been testing the engines that carry the missiles to their targets, according to Pompeo. North Korea claims also to be shutting down that site, though analysts think the missile engines are being tested elsewhere.

A sure sign Pompeo’s talks with Kim got nowhere was that Pompeo said he thought “some good outcomes” will happen not now but in the Trump-Kim summit “where ultimately some of these big difficult issues have to be resolved by the nation’s most senior leaders.”

He hoped, he added, most diplomatically, “to have those presented in a way that the two leaders can resolve them when they get together.”

Pompeo skipped at least two other crucial points that may not have come up at all in his meeting with Kim. What about the idea advanced by South Korea’s foreign minister, Kang Kyung-wha, of the U.S. forgetting about demanding the North submit a complete list of all its nuclear sites and facilities while shutting down its main nuclear complex at Yongbyon. In return, the United States would go along with that end-of-war “peace declaration” that Kim and Moon keep talking about.

Actually, some analysts fear Trump might just sign that “declaration” simply to say he reached yet another great deal with Kim, but it’s extremely unlikely the North would shut down Yongbyon, where its aging five-megawatt reactor has produced the plutonium for dozens of warheads. Nor is it really likely the United States will stop asking for a list of the North’s nuclear facilities, including storage areas for nukes and missiles.

So what’s next — will Trump and Kim actually meet, and will Kim go to Seoul as Moon’s guest in exchange for the hospitality extended by Kim in Pyongyang when Moon went there for their third summit last month? The answers to all these questions are up in the air.

One mystery surrounds China’s willingness to help. U.S. relations with China appear have hit a low in the midst of acrimonious debate over tariffs imposed by Trump to curb China’s enormous trade surplus with the United States and retaliatory tariffs imposed by China.

China’s foreign minister, Wang Li, warned Pompeo that the United States should “stop such misguided activities” in order “to keep our relationship on the right track,” to which Pompeo cited “fundamental disagreement.”

It did not seem, though, that they were able to overcome their differences even though both agreed on the importance of resolving the North Korean problem. China’s commitment to that goal is far from clear in view of numerous reports of China exporting much goods, including oil, to North Korea in violation of sanctions.