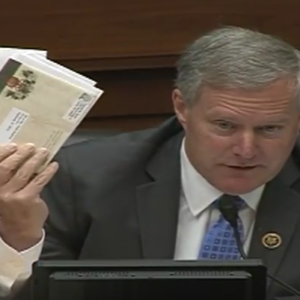 Rep. Mark Meadows, a North Carolina Republican, is among the lawmakers working on Postal Service reform in Congress. At a House Oversight and Government Reform Committee hearing on May 11, 2016, Meadows held up letters he said were postmarked in December but only delivered to him in April.
News

The United States Postal Service is back in the red this week, posting a $2 billion net loss for the second quarter of Fiscal Year 2016. One silver lining: Congress may finally be acting to address the mail delivery agency’s longstanding financial crisis.

Bipartisan Postal Service reform legislation is expected to be introduced “soon” in the House, according to Oversight and Government Reform Committee Chairman Jason Chaffetz, a Utah Republican who held a hearing on the subject Wednesday. This move would follow the introduction of a Senate bill to change an expensive retiree health benefits pre-funding requirement for postal employees, integrate these workers into Medicare and permit the Postal Service to sell new goods and services as a means of increasing revenue.

“There’s a remarkable degree of stakeholder consensus about the principles of successful postal reform. All four postal unions, the Postal Service and a wide range of companies and postal trade associations have agreed on reform principles,” Rolando said.

Some disagreements did emerge between lawmakers. For example, Ranking Member Elijah Cummings, a Maryland Democrat, said he favored allowing post offices to sell gift cards and money orders. Chaffetz, by contrast, said, “I feel very strongly that the post office should not be participating in business that is also found on main street. Selling coffee and t-shirts and, with all do respect, ‘other services’ that you can find down the street? I don’t think that is necessarily the role.”

The chairman added that he did see a new role, potentially, for the Postal Service in assisting with the Census, and the postmaster general agreed. She appeared more hesitant, though not immediately opposed, when Chaffetz floated fusing the Postal Service Board of Governors with the Postal Regulatory Commission in an effort to consolidate bureaucracy.

One proposal that won’t be included in House legislation is a move to five-day letter delivery for the Postal Service. Chaffetz said he no longer favors that idea or the addition of more postal holidays. “What’s happening is there’s more e-commerce out there and people want to have their packages and goods delivered right to them right now,” he said, suggesting Americans would miss weekend service.

Taxpayers Protection Alliance President David Williams, who has previously opined on postal reform for InsideSources, didn’t buy it. He said in an interview Wednesday that five-day delivery is “a no-brainer.”

“People will survive without mail over the weekend,” Williams said. “Congress shouldn’t be afraid to upset the apple cart and do something bold.”

He’s apparently not alone in that opinion either. The Washington Post editorial board slammed compromising postal reformers earlier this year, writing that they “capitulated on five-day delivery for letters, even though two-thirds of the public would be willing to sacrifice Saturday mail, according to a 2015 survey by the Program for Public Consultation at the University of Maryland’s School of Public Policy.”