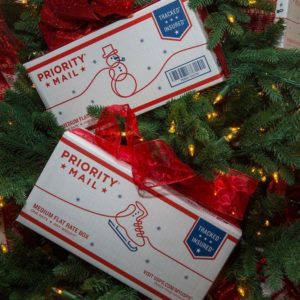 Postal Workers Deliver 20 Million Packages Per Day; What Can We Give Them in Return?

At the U.S. Postal Service Processing and Distribution Center in Cincinnati, my co-workers and I process millions of pieces of mail each day — postcards, magazines, catalogs, packages. If it’s mailable, we can handle it.

During the holiday season, the pace quickens like you wouldn’t believe. But I’m proud to be one of the more than 600,000 dedicated postal workers working around the clock to deliver holiday cheer all across the country.

The Postal Service is expected to deliver 800 million packages between Thanksgiving and New Year’s. That’s six packages for every one of America’s 128 million households — far more than any other delivery service would even consider.

During our busiest week, we will also process and deliver an estimated 2.5 billion pieces of first-class mail. Millions of people still love the personal touch of a hand-written greeting card.

Although the holiday season is frantic, it’s also the most rewarding time for those of us directly involved in the process. We take pride in fulfilling our obligation to provide universal mail service to all Americans — wherever they live.

But all that could be very different for next year’s holiday season, because our public Postal Service is under attack.

The White House Office of Management and Budget has proposed selling off USPS to private corporations. Meanwhile, a presidential task force has called for reducing delivery days, closing many rural post offices, and drastically increasing prices on package service and the mail.

A report by the Institute for Policy Studies found that rural areas are the most at threat if privatization moves forward. All told, 70 million people around the United States, in rural as well as suburban areas, could be exposed to the kinds of surcharges and fees that FedEx and UPS tack on.

The USPS was founded on the ideal that we should provide affordable service to everyone, and privatization would trample on that history.

And during the holidays, universal service becomes even more important. Imagine if shipping a simple gift to your family in a small town cost three times as much as it does now. Multiplied across a few gifts, that would put a real damper on your holiday spirit.

With a new postmaster general to be appointed early next year, the Postal Service could soon be led by someone who supports cutting service and selling off the post office. That’s why our union, the American Postal Workers Union, is rallying the public to call on the Postal Board to hire a postmaster general that will uphold the public mission and protect our national treasure.

The White House task force claims that the Postal Service is on an “unstable financial path.” The reality is that Congress manufactured our financial problem — and it could fix it.

Under a 2006 law, USPS is required to pre-fund our retiree health benefits 75 years in advance. No other government agency or corporation faces this burden. Without it, the Postal Service would’ve been profitable in six of the last seven years — all without one dime of taxpayer subsidies.

A bill in the House of Representatives, the USPS Fairness Act, would roll back this onerous mandate and allow the Postal Service to pay post-retirement health benefits on a yearly basis. The bill already has strong bipartisan support, with 233 Democratic and 65 Republican co-sponsors. It just needs a final push to become law.

Steve Beyersdoerfer is an electronics technician at the USPS Processing and Distribution Center in Cincinnati. He wrote this for InsideSources.com.