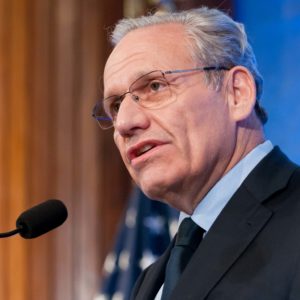 Acclaimed journalist Bob Woodward offers inside stories that escaped all of us while covering the three Donald Trump-Kim Jong-un meetings in 2018 and 2019.

In the course of 18 interviews and in 27 messages that he obtained between Trump and Kim, he provides details that make his latest book, “Rage,” enthralling reading for anyone, whether a scholar, journalist or government official or a total newcomer to the scene and the issues that have made it impossible to bring about permanent peace and tranquility on the Korean peninsula.

Since the first reports of the book came out last week, we’ve seen plenty of stories quoting Trump telling Woodward that Kim is “beyond smart” and Kim saying the bond between them was like a “fantasy film.”

We know that Trump was flattered by correspondence from Kim addressing him as “excellency,” and we have long been aware that Trump professed that he and Kim fell “in love” when they met for the first time in Singapore in June 2018 for what may have been the most over-hyped exercise in summitry and diplomacy ever staged.

Woodward embellishes on what is already out there with quotes and color, interlaced with comments from a range of principals, including Jim Mattis and Rex Tillerson, Trump’s first appointees as defense secretary and secretary of state, both of whom were shocked by Trump’s displays of ignorance, arrogance and ineptitude.

There’s much more to the book than Korea, notably Trump’s confession to Woodward that he was well aware of the dangers of COVID-19 as early as last February when he was saying publicly that the pandemic was not all that bad, would disappear by spring, etc.

Trump’s dishonesty to the American public and Woodward’s decision not to tell anyone what Trump had told him before the book came out  have captured the biggest headlines, but this account of dealings with both North and South Korea is just as captivating.

While Trump was currying favor with North Korea, he was showing his disdain for South Korea.

The book exposes Trump’s eagerness to walk out on the South, to forget about defending our ally from Korean War days while holding up the South Koreans for virtually all the costs of keeping American troops in the country. (Small nit: the book says America has 30,000 troops in South Korea, not 28,500, the correct figure.)

Not the least compelling aspect of this book is that it is written in a fast-moving style that grips the reader without appearing overly journalistic. Woodward covers complex issues in terse, short sentences, replete with quotes as well as background material from newspaper stories and other sources.

He is also realistic. Trump and Kim’s 391-word joint statement at Singapore “did not end the nuclear threat from North Korea,” Woodward writes, “it simply reaffirmed a loosely worded declaration that Kim had signed with South Korea in April 2018,” that is about six weeks before Trump and Kim met.

Woodward tell us nothing new when he writes that “Mattis was taken completely by surprise,” but readers may not have known how hard Mattis and General Vincent Brooks, commander of U.S. Forces Korea, tried to get around the stricture by arranging small-unit war games and avoiding publicity.

Still, Mattis’ disgust is evident when he remarked later, “What we’re doing is we’re actually showing how to destroy America. … How to isolate us from all of our allies.”

Woodward’s criticism of Trump goes far beyond the tell-all books that reveal lurid details of Trump’s personal life, his fundamental corruption and incompetence. It is much more important to know how Trump mishandled the coronavirus than to read about his sexual antics, his cheating, his hyperbole and outright falsehoods.

Woodward does, however, make one crucial mistake — not in fact but in judgment.

He writes, “Trump says repeatedly we had no war,” and “That was an achievement.” Not really. We weren’t about to have a war before Trump began his courtship of Kim Jong-un.

What was happening was that Trump was denouncing Kim as “rocket man” while North Korea conducted missile and nuclear tests — the last, three years ago, many times the force of the atom-bombing of Hiroshima in August 1945.

North Korea may not have tested its nukes since then, but it’s still got them and can return to testing any time. What’s really stopping Kim from ordering more such tests is North Korea’s economic distress and COVID-19, which now dominate his concerns.

Still, Woodward is correct when he writes, “Diplomacy should always be worth a try.” Less certain is his conclusion, “It may have been worth it.”

The Trump-Kim summits were worth watching but may have done more to obscure and paper over problems, raising false hopes, than to settle issues that are still very much with us today.