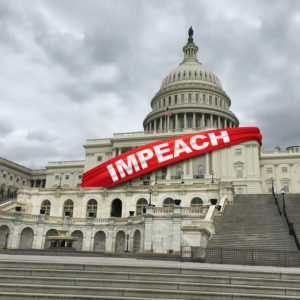 President Trump Should Testify in His Impeachment Trial

With Chief Justice John Roberts sworn in and every senator a duly sworn juror now considering the Articles of Impeachment against Donald John Trump, 45th president of the United States, every American, regardless of political belief, must demand fairness, transparency and facts. The chief justice and the Senate must ensure fairness and provide transparency. Trump and his team must tell us the facts or face perjury charges as well.

Either to get to the bottom of the wrongdoing or to clear his name, every American should insist on hearing directly from the president. Trump has indicated that he “like(d) the idea” of testifying and would “strongly consider” it as part of his impeachment proceedings. Trump also said he was willing to testify under oath in the Mueller investigation, but of course he never did. Trump must put his money where his (Twitter) mouth is and keep his word for once. If the president has nothing to hide, he should testify as part of his impeachment trial.

As the House impeachment managers formally walked the Articles of Impeachment to the Senate — where they were solemnly, silently received — the full weight of this historic moment settled over the Capitol.

Across town, the Government Accountability Office released a report making clear the president violated the law by delaying funds Congress had duly appropriated for Ukraine. That news comes one day after explosive revelations from Lev Parnas, who said Trump absolutely knew that his personal attorney was meddling in Ukrainian affairs and trying to stir up dirt on a potential political rival. Parnas knows because he was working with Rudy Giuliani, who worked at Trump’s direction.

Every week since the House formally impeached Trump, there have been new and escalating revelations that confirm what we heard from multiple witnesses in the House’s impeachment investigation. They each gave us a crucial look into the president’s abuse of power and obstruction of congressional investigations. But there was one key individual who wasn’t questioned, and the American people deserve to hear what he would say under oath: President Trump himself.

Trump loyalists have continually criticized Democrats for not having firsthand witnesses testify in the House investigation. However, this completely ignores the fact that Trump repeatedly blocked firsthand witnesses from testifying. You can’t get any more firsthand than the president himself.

With each new revelation pointing toward a president that was directly involved in directing the entire scheme, the American people and the Senate must demand testimony from the firsthand fact witnesses. It is not the House’s fault the president obstructed its investigation, and it is Justice Roberts’ and the Senate’s obligation to the rule of law and the future of American democracy to ensure we get to the bottom of this evolving scandal.

The first step is for the Senate to force a vote to call the one person who can speak about interactions with everyone involved and who has indicated he is willing to tell the truth — former national security adviser John Bolton. With Lev Parnas implicating others who he claims had knowledge of the scheme, including Vice President Mike Pence, Secretary of State Mike Pompeo, Attorney General William Barr, and House Intelligence Committee Ranking Member Devin Nunes, the Senate may need to hear from all, or be forever complicit in this cover-up of wrongdoings.

There is also precedent for Trump to testify. Both President Richard Nixon and President Bill Clinton testified in connection to their impeachment investigations. In many trials, the defendant is called to testify, and those who are wrongly accused are often eager to tell their side of the story.

Senators truly interested in the truth should force a Senate vote to get Trump to testify. Given that Majority Leader Mitch McConnell declared “everything I do during this, I’m coordinating with White House counsel” to essentially rig the trial, Republicans and Democrats must put country over party and not allow McConnell to block evidence and critical firsthand witnesses.

Common Cause and our 1.2 million members strongly urge Chief Justice Roberts and all senators to ensure a fair impeachment trial for the good of the nation by agreeing to the five key principles detailed in our recent impeachment report titled “Patterns of Deception: Obstruction, Corruption & Abuse of Power.” Included in these demands is that the impeachment trial must have witnesses. President Trump must be a witness in his own impeachment trial because no one, and especially not the president, is above the law.