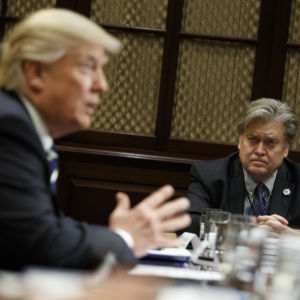 A Primer for Steve Bannon on the Media

No, Steve Bannon, counselor to President Trump, the media is not the opposition. Nor is it a monolithic structure acting at the behest of some unseen hand, in conspiratorial unison.

I am of the media and have been for 60 years. In fact, long before it was known collectively as the media.

We are an irregular army, an array of misfits, disciplined by deadlines and little else. We eat irregularly, are sustained on coffee and, at times, something stronger. We love what we do and we do it in the face of shifting threats, from death on the front lines of war, to the excesses of owners and the difficulty of making a living at it. We do the same job and do our best, whether it is for the smallest newspaper, newsletter or some great news outlet, like The Washington Post. John Steinbeck said, “No one does less than his best, no matter what he may think about it.” So do we.

My friend Dan Raviv of CBS News once summed up what it is about — during another one of these periods when journalism was under attack — by explaining his own motivation, “I like to find out what’s going on and tell people.”

Why, then, is the media seen as monolithic, conspiratorial and of one mind? I will suggest it is because of an immutable law of the work that is beyond explanation, but is indestructible and essential: news judgment. It is to journalism what perfect pitch is to musicians. You have it or you do not; and while it can be cultivated, it cannot be inculcated.

In play, it makes us look collaborative: Journalists appear to belong to some secret order, like the Freemasons. Whether we are from the smallest outlet to the mighty networks, if we are reporters, we will tend to pick the same things from a speech or an event. As an example, different newspapers will find the same news in the Sunday news shows and report it their Monday editions.

That is why when Kellyanne Conway uttered the words “alternative facts,” in an interview with Chuck Todd on NBC’s “Meet the Press,” we pounced. We did so not because we are of one mind, but because the enormity of such a concept demanded our attention. No conspiracy, no political agenda, no common purpose beyond the news, just the extraordinary concept that facts are fungible, legitimately subject to manipulation for political purpose. That is news. Big news.

Conway has complained that none of the other things she said in that interview were headlined. If she feels that way, clearly, she does not grasp the import of her own words; it was not the messengers, it was the message.

Why are so many journalists considered to be liberal?

I am not sure they are, but if I concede the point, consider this: We see the soft underbelly of society, whether we are covering refugees or police courts. People come to us seeking redress for real grievances and, mostly, all we can do is sympathize. If you have seen children dying of starvation or families sleeping on the street, you are unlikely to be worrying about the property rights of the wealthy. What you see conditions you.

I interviewed my first refugees in 1956. They were escaping the Soviet crushing of the Hungarian Revolution. That and later having seen thousands of refugees in Jordan, Pakistan, South Africa and Turkey, has indelibly informed me; those images are etched into my being.

When the president suspended the trickle of Syrian refugees we are taking into the United States. It seemed again to be the powerful denying the humanity of the weak, most pitiable.

History is not to be denied and facts are just that. Journalism shows us the world out there, not the world in a leafy suburb. If knowing something of the pain of the world and wishing for justice is liberal, then indict and convict us.

Surprisingly, we are not very political. Congress is stuffed with lawyers not journalists. We do not, in general, run for office.

Remember, Steve, if you know anything about the world, science or even politics, you learned it from journalists.We are the messengers, but we do not write the message.

Our essential job is to keep a wary eye on authority: Here’s looking at you, Steve.