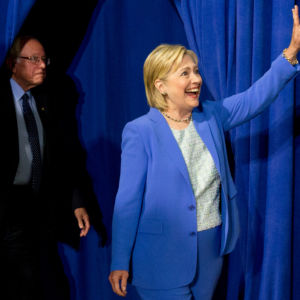 Hillary Clinton has her heart set on fundamentally transforming higher education in the United States. Just three weeks ago, in her Democratic National Convention speech, Clinton pledged to work with former rival Bernie Sanders “to make college tuition-free for the middle class and debt-free for all,” and in her speech August 11 in suburban Detroit, in which she laid out her vision for improving the nation’s economy, Clinton reiterated the importance of providing low-income and middle-income Americans with the opportunity to attain a college education without debt.

There’s no questioning whether the nation’s higher education system is in need of reform. From 1993 — the start of Bill Clinton’s presidency — to 2015, the average combined cost of a full-time undergraduate’s tuition, mandatory fees, and room and board for those attending four-year colleges rose (in inflation-adjusted dollars) from $8,758 to $25,409, an increase of 190 percent.

The chief component to Clinton’s plan to resolve the growing student debt crisis is to make public colleges tuition-free for most students and to eliminate tuition at all community colleges. According to Clinton’s campaign website, under her plan, “By 2021, families with income up to $125,000 will pay no tuition at in-state four-year public colleges and universities. And from the beginning, every student from a family making $85,000 a year or less will be able to go to an in-state four-year public college or university without paying tuition.”

Clinton says her proposal will be paid for “by limiting certain tax expenditures for high-income taxpayers” and by requiring states “to step up and invest in higher education.”

Many private college leaders are wondering just that. In an August 2 report by Politico, Patricia McGuire, the president of Trinity Washington University and a self-described supporter of Clinton, says the free-tuition proposal would put schools like hers “gravely at risk” and warns the policy could “ruin some of the places where low-income students get the best education and are most likely to be successful.”

Some might say these fears are unwarranted; after all, private colleges already charge significantly more than public colleges, and demand at many private schools is as high as ever.

Indeed, tuition and fees at private higher education institutions are much greater than at public colleges. In the 2014­-15 school year, the average price of tuition and mandatory fees at nonprofit four-year private colleges was $30,790, compared to just $8,543 at four-year public schools. But those figures are misleading. Many private colleges offer significant need-based scholarships and financial aid packages their public college counterparts can’t afford.

According to the National Association of Independent Colleges and Universities, after grants and tax benefits are taken into account, the average cost for tuition and fees at private colleges was only $11,320 in the 2010-11 school year, a little less than $4,000 more than what public colleges charged in the same year. If public colleges and universities become free for most students, however, that $4,000 gap could quickly become $10,000 or more at many schools, which, when multiplied over four years, would make private education relatively unaffordable.

Private colleges have a long and storied history in the United States of providing high-quality education and offering students access to unique academic disciplines, religious views and political philosophies not available or not allowed at publicly funded colleges. Of the top 50 “national universities” identified by U.S. News & World Report for having exceptional academic programs and “groundbreaking research,” 35 — 70 percent of the total — are private institutions.

While Clinton’s plan likely won’t threaten elite schools such as Princeton or Harvard, it would give a tremendous advantage to public colleges and likely drive many smaller high-quality private institutions out of business.

Instead of radically transforming higher education, free-market, pro-liberty policies — such as providing significant tax incentives to businesses and individuals who establish need-based scholarship programs and ending various unnecessary and burdensome student lending restrictions — should be used instead.

Clinton’s campaign says it advocates for economic equality and fairness, but there’s nothing fair about education policies that favor certain colleges at the expense of others and limit students’ higher education choices.