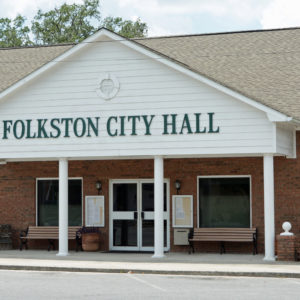 Private Prison Is Lifeblood to Rural GA Town. Why Are Feds Shutting It Down?

There aren’t a lot of reasons to come to Folkston, Georgia, the rural community of 2,500 people about two hours south of Savannah.

Perhaps to attend the annual Okefenokee Festival celebrating the swamp. Or maybe to visit the old Sardis Church where you can still see the bullet hole that was fired from the musket of a soldier defending the church from an American Indian attack.

But most people who come to the tiny city of Folkston are sent there. It’s the home of the D Ray James Correctional Institution, the town’s largest employer, biggest utility customer and top taxpayer.

And, unfortunately for the people of Folkston, it’s also slated to be shut down in September. The federal Bureau of Prisons (BOP) recently decided not to re-bid the contract on the facility. . The prisoners will be transferred to other facilities beginning this month.

“There’s about 350 employees out there that will not have a job,” says Mayor Lee Gowen. “There is not a lot of industry in our county, so the prison was a good option for people if they want to work here locally.”

Closing won’t just impact the town, locals argue. The prisoners themselves will suffer, too.

The prison has been operated by the GEO Group, Inc., which runs 65 facilities, mostly in the South and the Southwest. They offer programs to help prisoners transition to life on the outside. In the case of D Ray James, the prison population is made up entirely of criminal aliens — citizens of other countries who’ve broken laws here in the U.S.

Deanna Greenawalt, the prison’s programs manager, said she was “in shock” when she first heard of the closures.

“Because I am the programs manager, I do data collection for programming, which includes education, vocations… and our numbers are awesome,” she told InsideSources. “I mean the amount of GEDs, high school diplomas and INEA — which is the Mexican high school diploma — and national certifications we turn out in the vocation area. We have outstanding numbers in performance ratings.”

The prison also has outstanding statistics handling the challenge of COVID-19 in a crowded prison space.

As of early July, the prison had only one case of COVID-19 — a transferred inmate — while BOP-managed facilities had seen more than 6,500 inmate cases and 89 inmate deaths. The 1,555 inmates currently held at the prison — which is consistently ranked one of the highest performing BOP facilities — will be transferred to other prisons across the country, which have higher rates of the coronavirus.

According to Dr. Richard Smith, a dentist who is also on the prison’s medical staff, the facility has been extremely careful when it comes to the coronavirus and after it’s only case, it went into overdrive.

“We started out pretty early — in fact when the CDC first started talking about [COVID-19 mitigation] — and we began to screen with a two-pronged approach: First the staff and then the inmates,” Smith told InsideSources. “The Bureau of Prisons put a total stop on sending us inmates at the beginning of March.”

According to the BOP, many of its public facilities have empty beds because of early releases due to the pandemic, so it saw no need to keep the private D Ray James open. But because the inmates are criminal aliens, they cannot be released early.

Mayor Gowen said the D Ray James facility and its management team have been good for the city.

“They’re a great neighbor and friend to the community, when it comes to food drives and things of that nature,” he said. “A lot of people don’t like the idea of having a prison right next door to you, but I would say the GEO folks have been really good neighbors.”

On June 23, two Georgia U.S. House representatives and both of the state’s senators wrote a letter to BOP’s Director Michael Carvajal questioning the wisdom of closing the facility — especially during the coronavirus pandemic.

“We are deeply concerned about the repercussions of this closure that will result in the loss of nearly 350 jobs for the rural communities surrounding it during one of the most economically challenging times our country has experienced in a century,” according to the letter signed by Sens. David A. Perdue and Kelly Loeffler, and Reps. Earl L. “Buddy” Carter and Doug Collins.

Smith, who has worked at the prison for nine years, said the closure would be a great loss to Folkston.

“This is devastating, I can’t tell you how devastating this is to the community,” he said. “We have the best run facility in the entire BOP… and it just happened that our contract was coming up. So, I guess you can call it bad luck.”