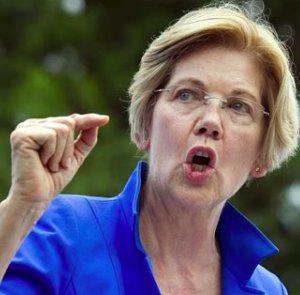 The leader of one of the nation’s largest progressive groups says he sees good news for Liz Warren in their newly-released straw poll.

“I look at results and I see Sens. Warren and [Kamala] Harris in really good positions,” Charles Chamberlain, the incoming chairman of Democracy for America told InsideSources. “Warren is set up well for the future.”

According to DFA, their members cast a total of 94,163 votes for potential candidates in the 2020 Democratic presidential primary, with the ability to rank order up to three different names.  The results:

While Chamberlain went to great lengths to avoid any favoritism or prognostications, he believes the results are good news for the American progressive movement as a whole.  “These are exciting results,” Chamberlain told InsideSources. “An overwhelming majority of the competitive candidates in our poll support our inclusive progressive agenda of Medicare for All, expanding Social Security, and protecting voting rights.”

When asked to rank the issues he believed were important to the DFA progressives, Chamberlain didn’t hesitate:  “Health care. Health care is absolutely the most important issue to our members. They’re looking for a candidate with a forward-thinking vision.” And that vision, according to Chamberlain, involves some form of socialized medicine such as Medicare for All.

Other key issues for progressives are climate change and voting rights. “There was so much voter suppression in 2018. Democrats definitely would have won Georgia, for example, if not for voter suppression by the secretary of state,” Chamberlain told InsideSources.

Given these issues, it’s not surprising that Sen. Sanders is at the top of the list. “The reason he’s in first place is because he’s been a strong, vocal supporter of these causes,” Chamberlain said.  So what is Joe Biden, who is not a supporter of single-payer healthcare and cast votes for welfare reform, a border fence and the war in Iraq, doing in second place?

“A lot of this is name ID,” Chamberlain said, and “nostalgia for the Obama years. Look at the White House now—who doesn’t wish Obama were still in office?”

“Plus the fact that, while some of the other candidates appear to be making up their minds about running, people feel like they know that Biden’s really in the race.  I mean, c’mon—does anyone really doubt that Bernie and Biden are running? I think when other candidates formally announce, you’ll see some shifting in the numbers.”

Sen. Elizabeth Warren would certainly like to see some shifting. This is just the latest in a series of polls/surveys (some not scientific) that put her out of the top tier of candidates. Chamberlain acknowledged she’s not polling well at the moment but wasn’t concerned about her candidacy.

“It’s true that when DFA was part of the ‘Draft Warren’ movement in 2014, she was at 42 percent. But there are a lot more candidates now. And Bernie Sanders just ran a strong campaign on many of the same issues, he’s solidified a lot of that progressive support. So this isn’t a slide for Warren. It’s just where we start out right now in this new field.”

And he may be onto something. When Bernie Sanders is removed from the ranked-voting results, Warren’s numbers jump from 8 percent to 17 percent, and put her within a percent or so of first place.  Perhaps this explains the recent meeting between Sens. Sanders and Warren, reportedly to discuss their future political plans.

The fact remains that the top three vote getters across multiple polls and surveys remain Bernie, Biden and Beto—”three white guys” as CNN’s Van Jones put it to Sen. Gillibrand, as he asked if she was “worried” about that fact. (Yes, she is.). Chamberlain isn’t.

“Nobody should be worried about where we are in the race right now, because we’ve got real talent and real leaders. As name recognition goes up, these polls will shift.

“Americans are eager for bold, progressive candidates who will fight for the multiracial inclusive populism America needs in 2020 and beyond,” Chamberlain said.