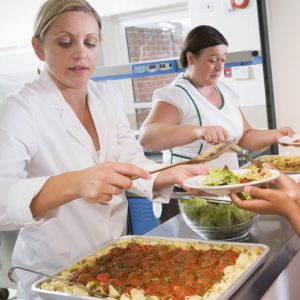 There’s no such thing as a free lunch, and thanks to progressive Gov. Gavin Newsom and the Democratic-controlled legislature, California taxpayers are about to re-learn that lesson.

Last week California became one of a handful of states to pass a “no-lunch-shaming” law, barring local schools from limiting the meal selection of students with large, outstanding lunch debts. While their classmates cruised the cafeteria buffet line, these students were either limited to a basic, no-frills lunch or given a cold meal, like a sunbutter-and-jelly sandwich, fruit, and milk.

When Gov. Newsom signed the anti-lunch-shaming bill into law, he thanked a Napa County elementary school student named Ryan Kyote for “calling national attention to how kids at his school were shamed and singled out” by being given “a cheaper, ‘alternative’ lunch that causes them to stick out.”

Not anymore, Newsom said. California has “outlawed that practice…ensuring all students a state-funded meal of their choice.”

And as a result, the state is about to start funding a lot more meals.

The real issue isn’t student dining. It’s the debt.  According to the School Nutrition Association, 75 percent of school systems reported an outstanding debt for unpaid lunch bills last year. And while the average debt of $3,400 per school system is modest, it ranges wildly from district to district. Some have debts in excess of $800,000, and many of the districts with lunch debt in the low six figures are small and rural, with minimal budgets to begin with.

What do these lunch shaming bills do to address that problem? “Nothing,” said Katie Hanzlik, communications director for California state Senate Majority Leader Bob Hertzberg.

Hertzberg was the prime sponsor of the bill and his spokesperson told InsideSources, “this law changes nothing about payment structures or retrieving unpaid bills.  It just changed the policy in the cafeteria.”

As for the impact of debt on local school districts? “That wasn’t the spirit of the bill. It was just to make sure children don’t go hungry.”

Except that children aren’t going hungry. Kids from low-income families don’t get a “shamed” lunch. They eat with everyone else, thanks to the generosity of the American taxpayer. The federal government already pays $14 billion a year to give free lunches to more than 20 million students every school day. And another 2 million or so kids get nearly-free lunches (students pay 40 cents).

The millions in annual unpaid lunch bills appear to come from families who are by and large financially able to pay, but simply decline to do so. One data point backing that theory is the overall trend of lunch debt since 2012. Seven years ago, the unemployment rate was double today’s and household incomes were lower. Today, incomes are up and more moms and dads are working, but the average lunch debt per district has risen by around 70 percent.

More proof this is about parents and not the ability to pay? States and municipalities who’ve passed similar no-shaming policies have seen their lunch debt soar.

When the Washington state House of Representatives passed the “Hunger-Free Students’ Bill of Rights” in 2018, lead sponsor Rep. Strom Peterson declared, “We have the opportunity to make sure that our school districts are not stigmatizing kids, and that our state’s students are getting the nutrition they need to succeed in school.”

Less than two years later, the state’s local school districts are struggling to cover the costs of the surge in demand for “free” lunches from parents who aren’t paying. Two years ago, Evergreen Public Schools had an unpaid lunch debt of $6,500. Now it’s $85,000. In September, Takoma started the school year with about $130,000 in lunch debt. And down the road in Denver, Colo., public schools adopted the policy and lunch debt jumped from $13,000 to $356,000 in a single year.

In Pennsylvania, their 2017 anti-shaming law inspired an “exponential increase” in the size of lunch debt, and the skyrocketing costs forced the state to amend it. ‘Alternate’ meals are back.

What makes California politicians think their results will be any different?

The SNA’s Diane Pratt-Heavner says her concern is for the families on the economic borderline. “I know 40 cents doesn’t sound like much, but if you have three or four kids, five days a week, and you’re struggling to pay the rest of your bills, it adds up,” she told InsideSources.  However, she also acknowledges that a significant amount of the problem comes from parents who just don’t pay.

She’s also frustrated that schools attempting to make reasonable, good-faith efforts to both feed students and collect the revenue they need are being accused of “shaming,” which Pratt-Heavner says isn’t true. “Our members are actually working very hard to avoid the ‘shame’ aspect while also controlling food costs. People don’t realize that in most districts the food services system is supposed to be self-sufficient, not part of the general budget. They have to find a way to feed these children with the resources they have.”

“What’s up with these parents, can’t they take a minute to make their kids a sack lunch?” asks Rick Futrell, a retired Vancouver, Wash. paramedic who had six kids go through area schools and whose local district is now more than $50,000 in debt.

“It seems like the parents just don’t care, and now everybody else has to pay.”