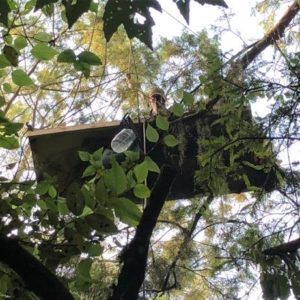 After months of protesting on the ground, protesters trying to stop construction of the Bayou Bridge pipeline in Louisiana have taken to the trees. As the pipeline protest continues, its members are increasingly adopting tactics that place them directly in front of construction. Late Tuesday night, the L’Eau Est La Vie protest camp sent out an email to supporters, boasting that they had used kayaks and treesitting to interfere with and halt construction within the Atchafalaya basin. They claim that the coming days will be crucial, particularly in light of a new state law, which increases the penalties for trespassing on a pipeline easement.

“For the last two days not one single tree has been cut in parts of the Atchafalaya Basin regarding this pipeline. We have kayakers resisting from water. We have climbers resisting in the air,” they said in the email.

Kayakers on Tuesday floated within 400 feet of construction, forcing the work to come to a halt. One was arrested for coming close to the site and later released.

On Wednesday, they continued these techniques, setting up what they called an “aerial blockade” just outside of the pipeline easement. The blockage consisted of an aerial pod tied to several different trees slated for removal. Protesters claim that if the trees are cut down, the pod will fall, endangering the life of the treesitter.

“This is a complex structure that is off of the easement, but its anchor lines are on the easement. ETP cannot continue cutting without endangering the life of the person in the sky pod,” said one water protector on Facebook, who did not want to be identified.

The state of Louisiana is raising the stakes for this sort of behavior. A law which passed the legislature earlier this spring with strong bipartisan support (64 sponsors of the House version alone) increases the penalty for unauthorized entry to and damage of critical infrastructure. The change also amends the definition of critical infrastructure to include pipelines and pipeline construction sites.

Although passed in May, the law took effect August 1. Any protestors arrested from now on will risk facing felony charges. Some of the treesitting protesters reportedly left their trees overnight, but it is unknown if they will return to them in the future.

Energy Transfer Partners, the company constructing the pipeline, did not lobby for the bill, but says that it supports “any legislation that protects critical energy infrastructure like Bayou Bridge or our other projects in Louisiana and across the country.”

Energy Transfer Partners stresses that protests that involve direct interference with ongoing construction, such as the treesitting, are dangerous and that police involvement helps to preserve the safety of both workers and protesters.

“It is important to remember that it is not safe for people who are not specially trained and are not wearing the appropriate protective clothing to be on or around an active construction site,” said Alexis Daniel, a spokeswoman for the company. “In situations where trespassing occurs, local police are alerted. We do work closely with local  law enforcement to ensure the safety of our workers and of all others in the area.”

Despite the protest actions, construction work has continued on other sections of the project, including work at other locations inside the Atchafalaya Basin.

The Bayou Bridge pipeline is on track to be completed in October.