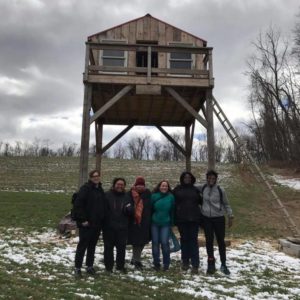 Spring has come to the prairie, but pipeline protesters have already moved east. The warmer weather means that construction is set to begin on the Atlantic Sunrise pipeline in Pennsylvania and protesters are already organizing to try to stop construction. The Atlantic Sunrise pipeline would cross Pennsylvania from north to south, adding 183 miles of pipeline to increase customer access to cheap natural gas. However, a small group of environmental protesters has vowed to resist the project and plans to draw upon tactics developed at Standing Rock to do so.

The Atlantic Sunrise pipeline is part of an overall energy expansion project in Pennsylvania, which looks to increase access to energy by bringing more natural gas to state electricity plants.

“This project is designed to relieve pipeline capacity constraints that lead to higher energy bills,” explains Transco, the company building the new pipeline. “It would include expanding the existing Transco transmission pipeline in Pennsylvania, as well as modifying some existing Transco facilities in other states, to allow gas to flow from north to south.”

Transco has already received the necessary permits to begin construction. All that remains to be obtained are easements on about eight acres on four separate properties in Lebanon County. The company moved to file eminent domain motions at the end of February and was hopeful that the final details would be quickly resolved.

“We have been negotiating in good faith with affected property owners for the better part of two years,” said company spokesman Chris Stockton. “Our goal is to treat all landowners fairly throughout this process. The use of eminent domain is only used as a last resort when all other attempts to negotiate an agreement fail.”

Mark Clatterbuck, a Lancaster County resident and longtime opponent of pipeline construction, was present at the Standing Rock protest camps and witnessed the clashes with police. Returning to Pennsylvania this fall, he decided to adopt elements of the Standing Rock approach to work to halt construction of the Atlantic Sunrise pipeline.

Clatterbuck and his wife have resisted energy development in the area for years. In 2015, he was arrested for trespassing after interfering with a core sampling crew examining the proposed pipeline route. He also founded the group Lancaster Against Pipelines, which continues to organize pipeline resistance actions.

The Lancaster protests are looking to maintain the feel of Standing Rock, but lack the publicity of last summer’s protest camps. They are currently staying at a camp they call The Stand. It is centered around the aptly named structure, which looks like a deer stand. The implication was intentional.

“It’s not that these structures are going to stop them,” said Clatterbuck, of the wooden structures the group has built. “They will serve as the center of an encampment of people who will be there permanently.”

The Stand is the second location of the protest, a fact that in and of itself indicates Clatterbuck’s group is already meeting with some resistance from local government. For several weeks this winter, protesters had been staying in a large barn outside of Conestoga, Pa. owned by two supporters. Earlier this month, area zoning officials informed the group that it was illegal for them to remain on agricultural land and that they must vacate the barn.

“A condemnation notice was issued on March 6, 2017, to restrict access to barn for assembly use. Barn is classified as agricultural building and may continue to be used for agricultural purposes,” said zoning officer Joellyn Warren.

Protesters are suspicious of the rationale, pointing out that historic barns are frequently used for weddings and parties.

“Every day, families across Lancaster County use their barns for meetings, family reunions, storage and countless non-agricultural purposes,” said Lancaster Against Pipelines, in a statement. “It is not the job of the building inspector to approve every action committed by every person who steps foot in a Lancaster County barn. This is a First Amendment issue.”

The controversy with the protest location is only one example of the disorganization of the protest. Wednesday was supposed to start a week of action in the area. Although promoted on social media accounts, as March 15 approached, no “actions” appeared on the calendar. A media volunteer told InsideSources that the main event would be the Rally for Raystown Lake on March 18, but the rally was not covered by local media.

Some of the protesters themselves even admit that stopping the Atlantic Sunrise pipeline is highly unlikely.

“Is it discouraging to know that right now we have an administration that’s very fossil fuel-friendly in place? That doesn’t make one happy,” Ann Pinca, a member of the Lebanon Pipeline Awareness group, another Atlantic Sunrise opponent told PennLive, a local newspaper. “But in some ways it almost makes you say, ‘Well, we just gotta work a lot harder. We gotta keep at it.'”

Protesters may find themselves spread thin in Pennsylvania. In mid-February, the Federal Energy Regulatory Commission approved a second pipeline, Mariner 2, which will cross parts of Ohio and West Virginia before entering the Marcellus Shale gas region of Pennsylvania. Pennsylvania’s Department of Environmental Protection had previously issued the final two state permits the project needed to proceed. Although much of the Mariner 2 pipeline will run parallel to a preexisting pipeline built to carry heating oil, but later repurposed to ship natural gas, area residents are unhappy with the prospect of another pipeline. In the vicinity of the Mariner 2 route, some have already begun complaining about potential group contamination risks. Protests will likely become more vocal as Sunoco moves to start construction on the Mariner 2 pipeline later this year.