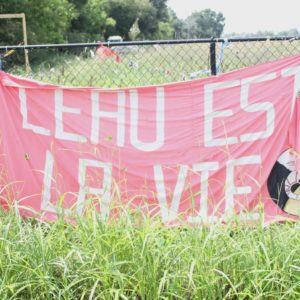 Protesters Mysterious About Next Steps in Bayou Bridge Protest

Rayne, LA–Compared to the Sacred Stones Camp outside of the Standing Rock reservation, L’Eau Est La Vie camp is a drop in the bucket. Instead of thousands of people, only a handful were gathered at the fenced off camp in a field seventy miles west of Baton Rouge.

From behind a wire mesh fence, a security camera, and a string of banners, the protesters faced off with pipeline workers behind their own electric fence and security camera. 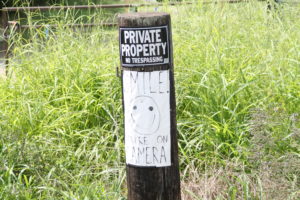 Just across the street, crews from Energy Transfer Partners worked to finish up the final stages of clean-up and restoration for a section of pipeline that was on the verge of completion.

Since the beginning of July, interactions between the protesters and the company have become increasingly frequent and provocative. On July 3, three protesters were arrested after locking themselves to construction equipment elsewhere on the project. They were released on bail late that night.

Another lockdown occurred only three days later, at a different point in the project. Mark Tilsen and six other protesters were arrested after he managed to shut down work on the site for several hours to raise awareness about a community in  St. James, LA, near the pipeline’s exit terminal. The protesters are concerned that the community lacks an evacuation route if the facility should leak. 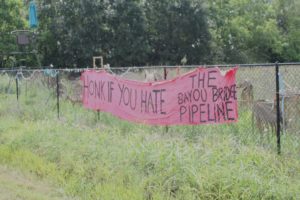 As the pipeline nears completion, the protests are reaching the final stages. Attempts to halt construction through court orders have so far proven unsuccessful. Now the group is pushing for direct action. Initially, they worked to minimize the number of people present at the camp, vetting potential visitors with an online application and hiding the location of their floating camp in the bayou.

This second location is easier to find. Since May, the group has been urging sympathetic followers to join them at the front lines.

“If you ever were thinking of joining us here in Louisiana, now is the time,” reads a Facebook post from May 7.

So far, the number who opted to join them is pale shadow of the thousands who traveled to North Dakota. The camp itself is small. From the road, a handful of tents and a few wood frame structures could be seen, along with a small watchtower. A row of banners adorns the fence surrounding the camp.

According to a source knowledgeable of the protests, the protesters are sitting on a healthy pool of cash, likely around $50,000. So far, little of it has been spent. They have posted two billboards in the area, but their plans for the remainder of the money are still unknown. When asked, the organizers refused to speak with InsideSources and did not allow the reporter to enter the camp.