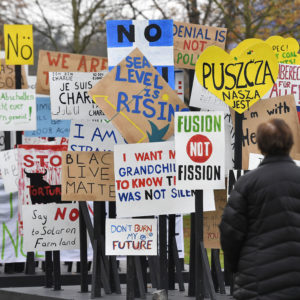 For more than a week, leaders from the around the world have been meeting at the COP23 talks in Bonn, Germany to discuss the progress that has been made on the Paris Climate Agreement. The U.S., which pulled out of the agreement earlier this year, was not invited. For a non-participant, however, Americans have been making a splash. Governors and mayors who support the goals of the climate agreement traveled to Germany to attend the COP23 conference, as did protesters, including some of the organizers of last year’s Standing Rock protest camp. On Monday, the various protest actions demonstrated that division continues among the ranks of the environmentalists, showing that while they resist the Trump administration’s pro-coal policies, they are far from unified in presenting alternative solutions.

Activists were particularly incensed by a White House-sponsored panel that highlighted ways in which fossil fuels and nuclear energy could play a role in mitigating the effects of climate change. To many of the environmentalists, the theme was a thinly-veiled promotion of coal. More than 100 protesters disrupted the event with signs, singing, and chants, first preventing the panel from speaking before walking out of the talk en mass.

“This event illustrates that our U.S. government is now run by fossil fuel billionaires who do not represent the values of the American people,” said Garrett Blad, executive coordinator of SustainUS, a youth-led advocacy group for sustainable development.

“We need to kick out corporate polluters and fossil fuel CEOs from our international institutions and from every single level of government back in the U.S. to ensure young people and those most impacted by climate change not only have seats at the table but are driving the agenda,” he continued.

The speakers invited by the White House failed to see why the topic was so controversial.

“This panel is only controversial if we choose to bury our heads in the sand and ignore the realities of the global energy system,” said White House energy aide George David Banks after the panel. He and the other speakers described how present technology is not sufficient to power the country without the use of fossil fuels.

Over the weekend, California Governor Jerry Brown, who had come to speak on state efforts to meet the Paris goals, was interrupted by protesters who shouted “keep it in the ground,” a reference to oil development in California. Brown, who has a record of promoting pro-carbon reduction policies, including a state-level cap and trade bill, grew increasingly frustrated with the hecklers, eventually snapping “Let’s put you in the ground so we can get on with the show here.”

On the whole, the protest element was heavily represented at COP23 in Bonn on Monday. As the UN climate talks were underway, the Women’s Earth and Climate Action Network (WECAN) International was also meeting in the city. The WECAN conference highlighted female indigenous voices in the environmental movement. During the event, women from around the world spoke on the movement towards climate solutions and the need to include women’s voices in this process.

Among the speakers were Kathy Egland, a member of the NAACP board of directors, Isabella Zizi, a member of the native environmental group the Indigenous Environmental Network, and Nina Gualinga a Kichwa leader from the Pueblo of Sarayaku in Ecuador. They stressed the connection between colonization and environmental segregation, saying that native peoples had to resist any and all development of their lands and calling present American energy policy “environmental racism.”

“We have a plan for zero development on our land. Indigenous people are protecting forests, biodiversity globally. We’re not here to negotiate we’re here to protect life! Woman across the globe, now is our time to resist!” said Gualinga.

While calls for bolder action came from a wide range of sources, the details of how to accomplish these emissions reductions remained sketchy. The protests showed that, for many environmentalists, half measures such as carbon mitigation or responsible energy development are unacceptable. The steps that countries will take to actually reduce carbon emissions are the subject of the formal discussions also occurring in Bonn. For the largely American group of protesters however, the details may be moot. Without a significant change in American policy, the Paris agreement will not effect the U.S.