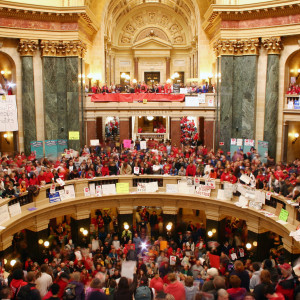 Despite decades of contraction, organized labor still has a disproportionately large voice in the government sector. Its influence presents real fiscal problems for states.

According to data from the U.S. Bureau of Labor Statistics (BLS), nearly 40 percent of all local, state, and federal government jobs carry the “union label.” To compare, only 66 of every 1,000 jobs—6.6 percent—in the private sector are unionized.

Overall, 111 of every 1,000 employees in the United States carry a union card, a historic low. In 1983, the first year BLS began collecting data on union membership rates, the union membership percentage was almost double what it is today.

Public-sector pensions have become an increasing worry during the past few years as the nation’s population continues to age and union members begin collecting on promises lawmakers made during prior contract renegotiations. According to BLS data, most organized labor members are males between the ages of 55 and 64—right on the cusp of retiring and beginning to collect pension payouts.

For example, the state of Wisconsin has one of the most sustainable public-pension plans in the nation, according to State Budget Solutions, a nonpartisan organization focusing on local and state budget issues. Wisconsin taxpayers have little to worry about, as their state’s public-pension fund can pay out 99 percent of its total liability, according to the state pension board’s numbers.

However, even the most fiscally responsible public-pension fund in the nation has been playing games with its numbers. The Wisconsin Retirement System (WRS) assumes its investment returns are twice as good as those achieved by private investors, forecasting an average of a 5.5 percent return every time, all the time.

When rational investment returns are used instead, the numbers show the state should expect its pension-fund investments to earn only $2 for every $3 it has promised retirees.

This scenario is currently playing out all across the nation. Barring reform, taxpayers will be forced to make up the difference between “what was promised” and “what can actually be paid out” – in addition to having already paid the public employees’ salaries to begin with.

As the Wisconsin example shows, the upcoming pension shortfall will constitute an enormous amount of money for even the least-irresponsible states in this regard. For the many states that have been playing even worse games with the numbers, the ultimate reckoning may mean nothing less than fiscal catastrophe.