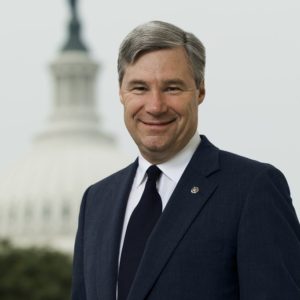 Purporting to Be Friends of the Court, a Gang of Five Threatens the High Court

Five U.S. senators have filed an amicus brief in the Supreme Court arguing that because that court has often abandoned its judicial role to partisan politics, politics could well lead to the court being “restructured in order to reduce the influence of politics.”

That’s right. The senators have made a political argument (really a threat) intended to influence the decision of a court they insist should be immune to political considerations. And not to leave any doubt about the seriousness of their political threat, the brief is signed by Senator Sheldon Whitehouse, D-Rhode Island, as counsel of record.

The case involves a Second Amendment challenge to a New York City regulation restricting the transportation of licensed firearms away from one’s home. The senators do put forth a legal argument worthy of the court’s consideration and relevant to the interests of members of Congress. They contend that the case is not justiciable because the City of New York has amended the allegedly unconstitutional law leaving no case or controversy for the court to resolve. The senators should have left it at that.

Not only do the senators make a blatantly political argument before a court they claim has improperly allowed politics to influence its decisions but they distort the court’s record, condemn others who file amicus briefs and ignore the inherently political nature of the nomination and confirmation process prescribed in the Constitution.

In their brief, the senators state that “from October Term 2005 through October Term 2017, this court issued 78 5-4 (or 5-3) opinions in which justices appointed by Republican presidents provided all five votes in the majority.” Of course this means that all four (or three) votes in the minority were justices appointed by Democrat presidents. Unspoken, but clearly implied, is that the dissenting justices were not bringing their political biases to the case. But had there been five justices appointed by Democrat presidents there would likely have been 5-4 (or 5-3) opinions the other way — examples of which abound during other periods of the court’s history.

More to the point, the number of 5-4 opinions relative to the total number of Supreme Court opinions is few. Over the 12-year period cited in the senators’ brief, the court rendered 1024 opinions, the allegedly political decisions thus accounting for less than 8 percent of the total. After reviewing all the opinions from the most recent term, Bloomberg Law reported that the court’s “liberal justices prevailed more often in closely divided cases than did conservatives. The 10-7 count was partly due to every Republican appointee breaking ranks at least once in 5-4 or 5-3 cases.”

The headline on a Washington Post commentary on the 2018 term read: “Those 5-to-4 decisions on the Supreme Court? 9 to 0 is far more common.”  “Splits get all the attention,” read the subhead, “but consensus is the rule, and that’s how it should be.”

The senators suggest that efforts to influence the court have been “industrialized.”  They assert that with greater transparency the many amicus briefs filed in support of the petitioners “would likely be revealed as more akin to marionettes controlled by a puppet master than to a groundswell of support rallying to a cause.”

No doubt we are to assume that coincidence, not a puppet master, explains the nearly 20 amicus briefs in support of the respondents filed on the very same day as the senators’ brief.  The senators further contend that “the country has witnessed an accompanying explosion of strategic ‘faux’ litigation — cases fabricated to bring issues before the court when litigants presume it will give them policy victories.”

The senators’ brief goes on at length lamenting the political nature of the confirmation process, having reference to the recent confirmation of Justice Brett Kavanaugh. They object that the National Rifle Association invested more than a million dollars in a campaign supporting Kavanaugh’s confirmation and that The Federalist Society was instrumental in the nomination and confirmation of Kavanaugh and many other Trump nominated judges.

But their protestations are difficult to take seriously. The NRA’s support for Kavanaugh is no different than Planned Parenthood’s longstanding abortion rights litmus test for Supreme Court nominees, or the Chamber of Commerce’s support for nominees thought to be favorable to business. In assigning the confirmation responsibility to the Senate, the framers did not expect the senators to temporarily rise above politics.

No doubt politics influence the members of our highest court from time to time, but threatening them with political consequences is a misuse of the judicial process and likely to exacerbate whatever problems exist.