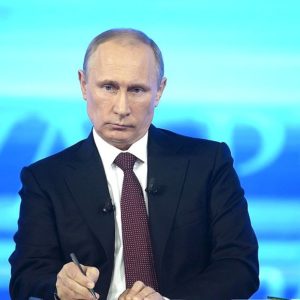 The barbarity of the Russian assault on Ukraine is neither mitigated by the ineptitude of the Russian army nor can hearts be uplifted by the bravery of the Ukrainians. Murder on a colossal scale is taking place in plain sight on television day after day.

At this writing, there are 3.5 million refugees and thousands of civilian casualties reported. This is killing, killing, killing without respite. The Russian economy is destroyed, and the consequence of this bloody slaughter is affecting the world economy.

Even pusillanimous nations like India and Brazil feel the hot breath of the crazed organ grinder Vladimir Putin and his Russian bear.

The invasion of Ukraine was folly and a criminal act, but its continuation has become pure and sustained evil.

Some in the U.S. commentariat have suggested with amazing thought gymnastics that all this is because of the expansion of NATO. But if NATO hadn’t expanded after the fall of the Berlin Wall, then Russia wouldn’t have felt threatened and wouldn’t have invaded Ukraine. Nonsense.

Russia has felt threatened in Europe since the days of the tsar. If NATO hadn’t expanded to include the Baltic nations of Estonia, Lithuania and Latvia, Russian troops would be billeted there right now.

Had Ukraine joined NATO, the United States wouldn’t be paying the price at the pump and Europe wouldn’t be shivering out the last days of winter, wondering how it will get through the coming months without enough fuel to produce electricity.

Security is the abiding fault line in Russia’s thinking about the West. Sure, St. Petersburg is close to the rest of Europe and could be overrun. And Moscow isn’t so far from European neighbors that it couldn’t be reached easily by an invader: Napoleon got there, and Hitler could have if he had been a better strategist. But most of Russia with its 11 time zones is geographically out of reach. That makes it hard to swallow the security argument.

Putin wants to restore Imperial Russia and the empire that reached even farther under communism — which makes him a diabolical romanticist. He wants to restore Russian hegemony over its former states: Ukraine first.

Larry O’Donnell, the MSNBC host, correctly postulated that for NATO, or the United States alone, to intervene to help Ukraine, nuclear war could result; war not just in Europe but also between the United States and Russia — the very thing that dominated the world from 1945 to the fall of the Soviet Union.

O’Donnell’s argument reveals the impotence that comes with nuclear weapons and sets up this question: Can we never challenge Russia, China or any other country with a substantial nuclear arsenal and the ability to deliver its weapons into the United States and Europe?

If that is so, does it inoculate Russia from invading the Baltic states?

We know the reality that lurks behind China’s ambitions for Taiwan. Is that more inevitable than ever? President George W. Bush said we would do “whatever it takes to defend Taiwan.” That is very unlikely now, if it ever was.

It isn’t that the reality of the international scene has changed so much as it has come into a clear and harsh light. However, one thing has changed: The slaughter, the unspeakable suffering in Ukraine will change the attitude of a generation to Russia in Europe. Russia will be a pariah, not a partner.

On a visit to Moscow, toward the end of the Soviet occupation of Afghanistan, I heard a four-star Russian general say, “Never again.” But the Ukraine invasion is again. Will Russia and other aggressors be deterred long after the last of the dead are buried in Ukraine, and long after the last body bag has gone back to Russia? Maybe for a generation, which is about how long it will take to rebuild the global economy after the Russian invasion of Ukraine has run its ghastly course.