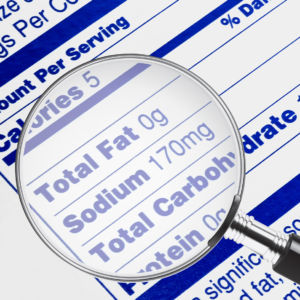 On June 13, the FDA indefinitely delayed several sugar and calorie labeling requirements made famous by Michelle Obama during the previous administration. In response, labelling advocates have accused the Trump administration of, as the Center for Science in the Public Interest’s Jim O’Hara put it, “denying consumers critical information they need to make decisions.”

Yet in fact, while many Americans need to cut back on sugar and calories, these food label changes will not help consumers one bit.

Former FDA Commissioner David Kessler once held a news conference to announce 21 proposed labeling regulations over the following year, and one concerned reporter asked, “What are we supposed to do before that?” To his credit, Dr. Kessler suggested they eat more fruits and vegetables.

Regardless, the International Food Information Council Foundation discovered in a 2012 survey that half of us think “it’s harder to figure out what you should be eating than it is to figure out how to do your own taxes.”

One of the requirements championed by Mrs. Obama is a special line on food labels for “added sugars.” There are indeed different forms of sugar, but it’s all sugar. If you are a diabetic or pre-diabetic, you may be shocked to hear your doctor tell you to avoid orange juice. A 16-ounce glass has 48 grams of sugar — only 10 grams fewer than a 16-ounce orange soda. But the FDA’s delayed rule would only tell you about the sugar in orange soda, not the naturally occurring sugar in smoothies or fruit juices.

Other labelling delays include a bigger font for calories and serving sizes. It’s easy to see why emphasizing calories might help. Far too many waistlines have been expanding. But no studies yet have confirmed that listing calories actually helps consumers with their weight.

A yearlong Harvard University study, for example, found that listing calorie counts in “health-conscious” Seattle had a “zero change.” Perhaps, as one of the authors speculates, it’s because overweight people already know that they are overweight and that what they are eating is keeping them that way.

The guidelines are supposed to solve that problem, too, with a new footnote explaining percent DV. Based on 2,000-calories-per-day diets, this is supposed to tell you whether a food is high or low in a key nutrient. Just multiply the percent DV times the number of servings you expect to consume, and track each key nutrient throughout the day and week. Perhaps doing your taxes is easier.

We’re missing the real problem: Trying to change behavior through labeling is a very old and very inefficient technology. As scholars Omri Ben-Shahar and Carl E. Schneider wrote in the recent book, “More Than You Wanted to Know,” the concept of “mandated disclosure” may be the most common and least successful regulatory technique in American law. It’s a “Lorelei, luring lawmakers onto the rocks of regulatory failure.”

That is precisely what happened with nutrition labeling. One study conducted by the Department of Agriculture concluded that the labeling has “no effect on dietary intakes of total fat, saturated fat or cholesterol,” its original targets. In fact, it’s not clear whether these were the right targets at all: The consumption information used for most of the diet/disease health relationships that inform the labeling is so poor as to be almost worthless.

So whether this latest round of “improvements” to the food label goes into effect is irrelevant, because it won’t help consumers choose the healthier diets they need. It’s time to let the old approach die quietly and find one that actually works.