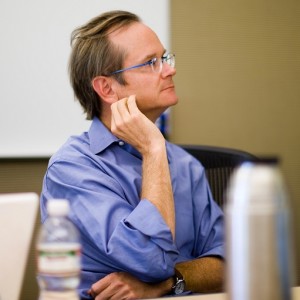 Q&A: Lessig on His 2016 Bid, Money in Politics, and Skepticism of Professors Who Run for Office

Last month, Harvard professor Lawrence Lessig announced that he was exploring a highly unusual White House bid in 2016: the Democrat wants to be elected as “a referendum president,” enact sweeping structural changes to the U.S. political system, and then step aside to let his vice president run the country.

As the Washington Post reported, “The singular focus of Lessig’s campaign would be passing the Citizens Equality Act, a package of reforms that would guarantee the freedom to vote with automatic registration, end partisan gerrymandering and fund campaigns with a mix of small-dollar donations and public funds.”

Lessig sees these changes as a prerequisite to meaningful federal action on climate change, gun control and a host of other issues, given that — in the words of Massachusetts’ Democratic Sen. Elizabeth Warren — “the system is rigged” in favor of monied interests.

In a phone interview last Friday, Lessig argued that his temporary presidency would only become problematic if it took too long for the Citizens Equality Act to pass. “I actually believe it wouldn’t take a long time,” he said. “I think this unprecedented mandate-like referendum would be incredibly hard for Congress to resist.”

Here are other highlights from Lessig’s conversation with InsideSources, edited for clarity and brevity:

InsideSources: I recently spoke to Carlos Sierra, the political consultant who managed the campaign finance-focused presidential candidacy of former Louisiana Gov. Buddy Roemer in 2012. You conferred with him before announcing your exploration of a 2016 run. Given that Roemer wasn’t even allowed into the Republican debates during the last cycle, what have you learned from his experience, and how would your campaign succeed where his failed?

Lawrence Lessig: “I think what Buddy did was to handicap himself unnecessarily by limiting the amount of money he would take from anybody to $100 and allowing no political action committee money. It made it implausible for people to imagine that he could ever be competitive.

RELATED: Can Lawrence Lessig Do What Buddy Roemer Couldn’t?

Say you were to make the debates. If moderators asked questions related to other domestic or foreign policy issues, would you decline to engage in those conversations? Would you just tie them to the Citizens Equality Act?

“I’ve got to answer every one of those questions in a way that’s responsive. What I believe is that practically every one can be answered while also tying the issue to this underlying inequality. You want to talk about climate change? I could tell you what I would support on climate change. But I’d also show you why what I would support has no chance in hell so long as this is the way we fund campaigns.”

You believe the Citizens Equality Act should be a bipartisan issue, and you’ve spoken positively about Donald Trump’s candor related to money in politics. Do you worry your kind words for him will hurt you with Democrats?

“It depends what they understand the words to be. I think the Politico report of what I said has been misunderstood. They quoted me correctly, but the context of the question wasn’t clear. I was not saying Donald Trump and I should run as third-party candidates. I was saying I hope somebody runs in the Republican primary as a referendum candidate. Then the question was, ‘Well, what about Donald Trump?,’ and I said it would be great if Donald Trump ran. It would make me happy not only because he would be a referendum candidate, but because it would also mean that the other things he’s saying — which I find reprehensible — would not be part of his program.

What we need to do is be willing to recognize where people we disagree with fundamentally are saying things we agree with. It’s kind of foreign to the way Washington works, but I think this is the problem with Washington. I’d work with my worst enemy if it brought about reform of the system, and to the extent Donald is pointing to the corruption of the current system, I think he’s right. His solution is wrong — the idea that the solution is to elect billionaires is crazy.”

You mentioned the Politico piece. There have been conflicting reports on whether you’re ruling out an independent run if you don’t win the Democratic nomination. Are you?

“Those are conflicting only because they misunderstand the Politico statement. I’m not ambiguous about this. The reason I’m not running as an independent is I think it’s too dangerous to potentially spoil the race. We’re talking about the high probability of a Republican candidate who would have no hesitation to take us to war with Iran. That would be catastrophic.”

We sometimes hear that all we need to do is increase transparency when it comes to money in politics. I take it you believe that’s insufficient. Why?

“Yeah, I think that’s a ridiculous view. I don’t actually know anybody anymore who says that’s all we need to do. What transparency alone does is just prove to people that the influence exists. What we’ve got to do is change the economy of influence so that it’s not the tiniest fraction of the one percent influencing.”

Do you have any sense of how much it would cost to give each voter a voucher to contribute to presidential and congressional campaigns, as you’re proposing?

“If you did a $50 voucher, that would be $7 billion an election cycle or $3.5 billion a year. It sounds like a lot of money, but Cato estimates that the level of corporate welfare every year is about $100 billion, so if you could reduce that by five percent we could pay for this.”

I can’t resist asking you about being an academic in politics. When Elizabeth Warren ran for Senate against Republican incumbent Scott Brown, he constantly reminded voters that she was a Harvard faculty member, typically referring to her as “professor.” This was seen as a suggestion that Warren was an ivory tower elitist and out of touch with average Americans. What do you make of that denigration of your profession, and is it an impediment as you seek a broad base of support?

“I understand and frankly share the skepticism of many people about many academics. I believe our profession of legal academics should think of its responsibility to the public more than it does. Too many of us spend our time in private consulting. I’m not out here to defend the role of professors, but Scott Brown was pretty wrong about how out of touch Elizabeth Warren was. In fact, Elizabeth Warren is incredibly in touch with what people are thinking about the issues she was talking about. She is my role model, and I would love to be half as good as she is at connecting to people.”

Lessig’s final decision about running will come after Labor Day — the deadline he’s set for himself to raise $1 million in crowdfunding for a campaign. As of Monday, a week before the holiday, the professor reported having just over $705,000 in support.