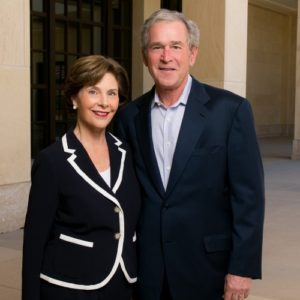 Q&A With President George W. Bush on the Importance of Leadership and Humor

Posted to Politics May 30, 2019 by Hannah Abney and Andrew Kaufmann

The following is a conversation with President George W. Bush. This discussion is excerpted from the George W. Bush Institute’s podcast The Strategerist:

Question: The name of the George W. Bush Institute’s podcast The Strategerist was inspired by “strategery.” Tell us the story behind this famous Bush-ism.

Bush: For 17 years I thought I said the word “strategery.” Occasionally I would get my words mixed up, they call it a malapropism. So Laura and I took Lorne Michaels, the head of “Saturday Night Live,” to dinner and at one point he said, “We created the word ‘strategery.’” I said, “No, you didn’t. I said it.” And he said, “No, no. One of our great speech writers came up with the word and we basically stuck it on you.”

I said, “You’ve got to be kidding me. Lorne, for all these years, I thought I said ‘strategery’ and you’re telling me I didn’t?” He said, “That’s right.” I said, “Well, let me ask you, did the guy come up with mis-underestimate?”

I’m honored the malaprop, that evidently I didn’t come up with, is a part of the Bush Center.

Q: Your leadership style is centered on taking your work more seriously than you take yourself. Why is this important?

Bush: I think it’s very important not to take yourself too seriously. I think any time you are part of an organization where one attempts to advance their own interests, it undermines the culture of an organization. For example, during the presidency I worked hard to surround myself with people who were there not to serve me or a political party, but were there to serve the country.

Q: You have said a part of the presidency includes humor because our nation needs to laugh. So what does it feel like to be the guy providing that material?

I think it is very important for society and individuals to either collectively or individually laugh. Laughter is such a part of a light spirit, and a heaviness on a society or a heaviness that clouds an individual’s vision is … very weighing. It’s hard to be optimistic if you’re not able to smile.

One of the jobs of a president is to create an optimistic vision for the country, and I don’t see how you can be optimistic if you’re worried that somebody’s making fun of you.

(My dad also) befriended Dana Carvey. At the end of his presidency he had a farewell party for the White House staff, and he surprised everybody with Dana Carvey as the guest. I thought it was a great example of humility and humor.

Q: As we were doing our research for this interview, we Googled George W. Bush and humor. About 400 of the results are of you dancing in different places.

Q: It is. One moment that came up was from Livingstone, Zambia. You were there as part of the Bush Institute’s cervical cancer screening and treatment program. Women were being tested for the first time to see if they had HPV or cervical cancer, and, understandably, they were very nervous. But the mood shifted.

Bush: I remember that clearly, and here’s what struck me: Amid all the deprivation and poverty, there was a joy. (The women) started singing and clapping, and a couple of us started dancing and it was really, really fun. It was part of my way of telling them that I could and was trying to relate to them, but that I also knew they were nervous.

They were nervous being around a president. And frankly, they were a little nervous because finally somebody had paid attention to what may be a major health issue and they were uncertain as to whether or not they needed treatment. And so the dancing and the joy was a way for me to help them enjoy the moment. They really helped me more than I helped them. 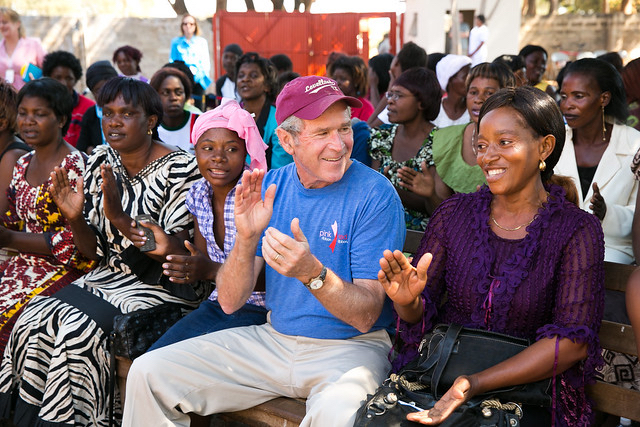 Q: If all you did these days was watch 24-hour news, maybe you would feel like the world is ending. But what keeps you optimistic?

Bush: My understanding of the history of this country. We have been through some very difficult periods in the past. This one, for some people, seems like the most difficult; it’s not. Democracy has got institutional safeguards that enable the ship of state to sail on, that elections enable democracies to heal, and that the soul of America is good and generous. And so, I’m very optimistic.

Q: Nothing shows that soul as much as the President’s Emergency Plan for AIDS Relief (PEPFAR), which started under your administration.

Bush: PEPFAR was a big deal. Sad thing is most Americans have no clue (what it is). And the answer is, it was your taxpayers’ money going to save lives on the continent of Africa. There was a pandemic destroying an entire generation of Africans and thanks to the generosity of the American taxpayer, millions now live who would have died.

The fundamental question is: Do the American people see that it’s in our national interest to save a continent from a pandemic? Oftentimes people will say, “Well, we’ve got our own problems,” and my answer is, “Yes, we certainly do, but nothing compared to a pandemic and its destructive effects on a continent.”