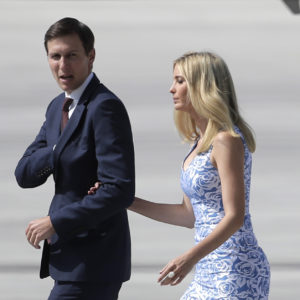 Ivanka Trump and her husband Jared Kushner arrive for the G-20 summit in Hamburg, northern Germany, Thursday, July 6, 2017. The leaders of the group of 20 meet July 7 and 8. (AP Photo/Markus Schreiber)
[IS] Opinions

PYEONGCHANG, South Korea — Ivanka Trump’s weekend in South Korea is sure to set off another round of intense speculation while the vice chairman of North Korea’s ruling Workers’ Party leads a delegation south at just about the same time.

The big question is whether the presidential daughter will turn around, say hello and shake hands with Kim Yong-chol, behind her in the VIP box at Pyeongchang’s Olympic Stadium, at the Closing Ceremony on Sunday.

No one should expect that Ivanka will ask Kim what his boss, North Korean leader Kim Jong-un, is doing about his nuclear and missile program, but a handshake would be interpreted as indicating that her father, President Donald Trump, may be willing to authorize talks between U.S. and North Korean officials.

She might, however, want to avoid him for one special reason. He is thought to have been the man behind the sinking of the South Korean navy frigate Cheonan in March 2010 with a loss of 46 sailors’ lives and then the shelling of Yeonpyeong Island 10 months later that killed two South Korean marines and two civilian workers. South Korea’s opposition conservative party is strongly denouncing his impending arrival.

Ivanka’s presence at dinner with South Korea’s President Moon Jae-in at the Blue House on Seoul on Friday night and then at the ceremonies on Sunday should provide quite a contrast with Vice President Mike Pence’s appearance on the opening weekend of the Games. Pence has been widely criticized for not at least saying “hi” to Kim’s little sister, Kim Yo-jong, at the Opening Ceremony two weeks ago and then at a dinner in the Blue House.

Pence left the dinner after five minutes, saying he was due to dine with America’s Olympic athletes, but his biggest offense in the view of many critics was not standing up when the unified North and South Korean team marched by flying the unified Korea flag of the Korean peninsula, in light blue against a white field.

The eyes of the world will be on Ivanka as millions wait to see if she stands up as the North-South Korean athletes march by again at the closing. She may want to indicate her support for Pence’s decision by remaining seated, especially since the North Koreans are not likely to rise for the U.S. team.

Beyond superficial appearances and gestures, though, the deeper question is whether Ivanka will be bearing a letter from her father to President Moon in which he signals his desire for dialogue with North Korea as Moon has been requesting with rising urgency during these Olympics.

Trump is anxious to counter North Korea’s charm offensive with his own show of cooperation with Moon’s desire for follow-up moves to bring about reconciliation with the North. He may even extend his own invitation for Moon to see him in Washington while Moon considers his response to Kim Jong-un’s letter, delivered by his sister when she saw him at the Blue House the day after attending the Opening Ceremony.

U.S. officials are attaching highest importance to the implications of Ivanka Trump’s visit knowing that Moon will be meeting privately with Kim Yong-chol and his delegation. Moon in that meeting may stress the importance of U.S.-North Korean dialogue as needed before he agrees to seeing Kim Jong-un in Pyongyang. He may even tell his North Korean visitors that he cannot cancel South Korean and U.S. joint military exercises, set to begin after the Paralympics next month, unless the North Koreans shows some willingness to open talks with the Americans.

Some critics have questioned whether that story, as told by the White House, is really true or is it just a pretext to cover up the fact that Pence while here avoided any open contact with Kim Yo-jong.

Lending credence to the official U.S. explanation is that North Korea has repeatedly stressed the need for its nuclear program, which is now enshrined in the North’s constitution. North Korean officials for years have been saying they will never give up their nukes or the missiles they say are needed for “defense” against the Americans. Kim Jong-un has boasted that his intercontinental ballistic missiles will soon be sophisticated enough to carry nuclear warheads to targets in the United States.

Although Kim Yong-chol will not attract the same level of global media attention as did Kim Yo-jong, his visit may be more significant in terms of substance. Kim Jong-un’s sister no doubt has tremendous influence but is not thought to have made official demands or protests.

Her presence, always slightly smiling and polite, along with that of North Korea’s venerable Kim Yong-nam, the 90-year-old ceremonial chief of state, succeeded in stealing publicity from the Americans, creating an atmosphere in which North Korea can go on driving a “wedge” between the U.S. and its South Korean ally.

Kim Yong-chol is expected to deliver precise conditions for North-South rapprochement beginning with cancellation of the American and South Korean war games. He also is sure to ask for South Korea’s cooperation in doing away with U.N. sanctions imposed after North Korea’s nuclear and missile tests.

Moon has said he will not cancel the war games or call for easing of sanctions. Rather, he believes the North Koreans should be discussing those issues directly with the Americans while establishing “the right conditions” for a summit with Kim Jong-un.

The Americans for their part have been reminding their Korean friends that Kim Yong-chol is blacklisted by South Korea, is viewed as a deeply suspicious character and should not be trusted. Moon, of course, knows all that and is expected to be extremely careful in dealings with him, stressing his desire for reconciliation while avoiding promises, much less concessions.