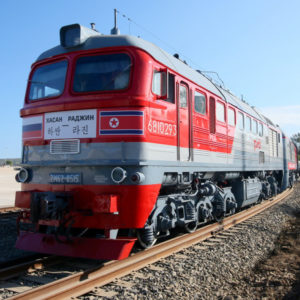 The notion of opening rail service between North and South Korea is captivating. You have to hope that someday the dream will come true and trains will be hauling passengers and freight from South to North and back again as they should have been doing for many years.

There are, however, obstacles that make the whole idea unrealistic. Quite aside from U.S. and UN sanctions that prohibit construction right away, other issues may be more serious. For one thing, there’s the cost. Who’s going to pay for overhauling the North’s railroads?

Experts from South Korea, after studying first the western and then the eastern rail system in North Korea, say the entire network is in awful shape. After 10 days looking at the tracks, roadbeds, bridges and tunnels of the North’s eastern rail system, Lim Jong-il, director of the railway construction division of the railway bureau of the ministry of land, infrastructure and transport, refrained from blunt language as he talked about what he and his colleagues had seen.

The eastern line, said Lim, was “almost the same” as the western or Gyeongui line, which the team had inspected earlier and was bad enough. “More in-depth inspections” would be necessary, he said, acknowledging his experts need much more time, months or even years, closely examining everything to do with the North Korean system before reconstruction and repair can begin. Will North Koreans permit microscopic study of their system? How deeply can South Koreans delve into the North’s infrastructure before the North Koreans decide they’re spying, jeopardizing security?

Let’s say eventually the South Koreans get past issues of security and sanctions. It’s fine to dream of the North-South trains running at last, but the price of fixing the system will run into the billions of dollars, or trillions of won. No one knows the final price tag, but one estimate comes to upwards of $40 billion.

Who, exactly, will pick up this tab? Can the South cover the costs in a time of economic uncertainty at home? Should South Korean taxpayers have to pay for the North’s new railroads while the North invests precious funds not only on nukes and missiles but also on a conventional military establishment of more than 1 million troops? Might Kim Jong-un ever abandon his nuclear program and vastly scale down his armed forces, allocating the savings to upgrading the North’s railroads and roads and much else, including medical care and food for his people?

Yet another question arises. Who’s going to provide the labor? Would South Koreans be working on the North’s railroads, taking advantage of their experience on the South’s great system? And if North Korea provides thousands of its people to carry out the South Korean plan, how much would they get paid, and by whom? Would it be too much to tell Kim, no forced labor, no de facto slavery?

And that’s not all. The team inspecting the North’s eastern system had to return from North Korea by bus even though a single-track line was built by Hyundai Construction nearly 20 years ago to carry tourists from the station on the south side of the Demilitarized Zone in the northeastern corner of South Korea to Mount Geumkang, looming north of the DMZ.

That line remains unused. U.S. Army Captain Eric Estrada, with the military armistice commission of the United Nations Command, told me the gleaming new station was empty. Nor does any line run up the South Korean east coast all the way to the DMZ. A single track, built during the Japanese colonial era, has long since been scrapped. That’s in contrast to the west coast Gyeongui line, which runs up to Dora-san Station before linking to the track, also not used, also built by Hyundai, to the Gaesong Industrial Complex inside North Korea.

In other words, even if sanctions are removed and serious work begins on the North Korean system, the eastern or Donghae line has to be extended northward from Gangneung more than 100 kilometers below the DMZ. Again, the total price tag would be well into the billions of dollars – an investment that’s needed if freight is to move from Busan, one of the world’s biggest port complexes, up the Korean peninsula to Russia and eastern Europe.

One conclusion is inescapable. Though the road may be paved with good intentions, don’t count on the trains running up and down the east and west sides of the Korean peninsula any time soon.