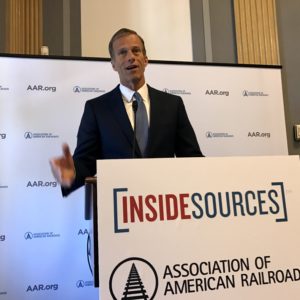 The Association of American Railroads (AAR) hosted the discussion alongside InsideSources. Speakers from several industry groups expressed their views on the current state of the railway industry. They all highlighted the need for infrastructure investments, continued advancements in safety, and updates to the railway system as a whole to better meet growing demand.

The event also highlighted two lawmakers that have been at the forefront of issues facing the railway industry. AAR President Edward Hamberger presented the first ever railway achievement awards to Republican Sen. John Thune and Democratic Sen. Bill Nelson, respectively the chairman and ranking member of the Senate Commerce Committee. Both expressed how much railways have been a part of our economy and culture.

“It’s critically important to our economy, agriculture, energy,” Thune said while accepting the award. “You can go right down the list of things that powers our homes, that provides the fuel for our cars, the things that we need–they are likely to be shipped on rail.”

Thune and Nelson have worked on a bipartisan basis for the past several years to address issues facing the industry. They have sponsored and introduced bills aimed at providing funding and a better regulatory environment. More recently, the two senators worked to update the Fixing America’s Surface Transportation (FAST) Act.

“I grew up listening to the railroad,” Nelson said. “As a matter of fact, the Florida East Coast Railway runs right through my family’s property, and so a railroad has been a natural thing to me all my life. As a matter of fact, that railroad is there and that’s how Florida was developed, just like so much of the west.”

The railroad industry has a significant impact on other sectors across the economy. AAR states freight railroads created nearly $274 billion in economic activity, generated nearly $33 billion in state and federal tax revenues, and supported nearly 1.5 million jobs nationally in 2014 alone. 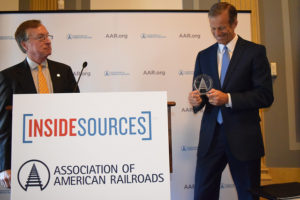 The American Short Line and Regional Railroad Association, the Railway Supply Institute, and Amtrak joined the panel discussion. They highlighted how critical the railway industry is for transporting goods and customers that the rest of society depends on.

Infrastructure investments and access to capital were a primary concern during the discussion. The railway system has some assets that are a century old and in need of updating. The panel added that any infrastructure spending package from congressional leaders needs to include worthwhile railroad investments.

“Certainly we need investments in our infrastructure,” Caroline Decker, vice president of government affairs at Amtrak, said during the discussion. “Infrastructure and a new fleet. That’s on out infrastructure wish list.”

Jeffries adds trucks should invest more into their own infrastructure like railroads do. The trucking industry is a direct competitor of railways, but it has the added advantage of not having to finance roads and the infrastructure it relies on. He also argued that the federal government should approve private infrastructure projects more quickly. 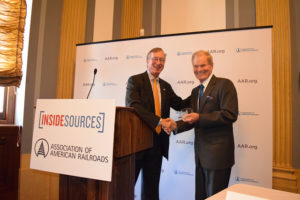 “Freight railroads are privately financed,” Jefferies said. “That results in jobs, we have a fully unionized workforce, and those are good jobs.”

Amtrak CEO Wick Moorman has focused on improving the passenger rail system since starting on the job last year. He hopes to improve safety, training, efficiency, and modernization. Decker notes his goal is to make Amtrak run more like an efficient business.

“From the onset, he made clear there were things he was focused on,” Decker said. “There’s just a laundry list that is very long and very important.”

The FAST Act was recently updated by lawmakers to provide more funding for the railway systems. The act could help provide needed funding, but there are still many challenges. Railway Supply Institute’s Nicole Brewin notes it’s difficult to make needed legislative changes because of roadblocks in the political system.

“Things are a lot more fractured, politicized,” Brewin said during the discussion. “You have to attach to a coalition just to get anything done.” 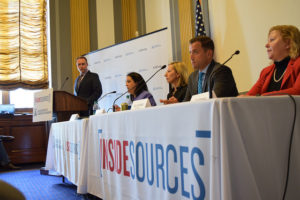 The AAR has also been vocally opposed to what it sees as overregulation in the railway industry. AAR believes balanced regulations will help boost private investments even further. The freight railroad industry has spent over $630 billion since the industry was partially deregulated in the 1980s. The Senate examined the issue of overregulation Feb. 1 during a hearing.

President Donald Trump has targeted infrastructure as an area in need of improvement. The president has proposed investing $1 trillion into projects that will update and fix the national infrastructure. He has also touted his plan as a way to create jobs.