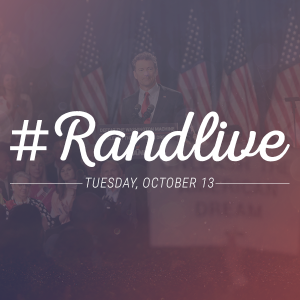 By the end, even he seemed kind of over it.

Kentucky Sen. Rand Paul, the libertarian-leaning Republican presidential candidate, spent much of Tuesday being videoed on a livestream by his campaign staffers. The broadcast appeared to be a gimmick aimed at boosting Paul’s lackluster poll numbers, but its long stretches of monotony and more than a few awkward moments probably didn’t do much to improve his chances.

To give Paul some credit, an all-day livestream is a clever idea, and it certainly proved entertaining at various points, if only as a novelty. Viewers saw the senator riding with his staff through the cornfields of Iowa, “jammin’ to some good tunes” by the likes of Metallica and KT Tunstall. (They even took music requests using the hashtag #RandLive.) Paul talked about his favorite philosopher, Albert Camus, and riffed (with genuinely contempt) on Democrats and Republican Party “idiots” who hold more hawkish foreign policy views.

As he was seen giving interviews and talking to college students throughout the day, Paul also offered reminders of why Time Magazine once called him “the most interesting man in politics.” He gave his speech on how the smartphone generation ought to be concerned about privacy, given National Security Agency surveillance revealed under President Barack Obama. Then he talked up bipartisan criminal justice reform, nodding to racial disparities under the current system. On cutting government, he promised no sacred cows, inveighing against “an unholy alliance” between Republicans preserving defense spending and Democrats protecting social programs.

“What makes my candidacy unique is that I’m willing to say both sides have a problem,” he said.

Unfortunately for Paul, the video also generated footage that wasn’t particularly presidential. The senator’s livestream embarrassments may not rival a woman Periscoping while drunk driving, but they weren’t ideal. First of all, there were the many times when the feed just cut out. So much for an all-day stream. Then there were the awkward pauses, like when iPhone songs wouldn’t play. And those long shots of the back of Paul’s head? Not particularly compelling.

Paul at least seemed conscious that the whole thing was a bit absurd.

“I wish I knew why I was live streaming. I have been saying I don’t want to do this,” the senator joked in an interview during the day.

Later, after reading aloud mean tweets about himself, he looked into the camera and addressed a commonly Googled question about his campaign: “Is Rand Paul still running for president?”

“I wouldn’t be doing this dumbass livestreaming if I weren’t,” he said.