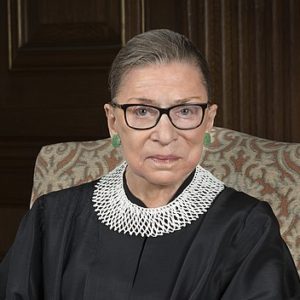 RBG Brought Rights to the Fights

Wanted: Someone to sell out marquee venues in Washington.

How about the Notorious RBG?

U.S. Supreme Court Justice Ruth Bader Ginsburg, along with her co-authors, was set to appear at the Newseum to promote her book.

Except there’s one problem: The Newseum needed a bigger room.

Ginsburg’s function was moved to George Washington University because of overwhelming demand. Her event originally was scheduled for the Newseum’s Annenberg Theater, which seats about 600, balcony and all.

In fact, when then-Newseum president and CEO Jeffrey Herbst opened the event at the podium, he gave us the back-story. Herbst told us, following the Newseum’s announcement of RBG’s appearance, that the time-honored museum that focuses on the news media and the First Amendment received a record 1,600 RSVPs by the next morning.

Sadly, Ginsburg died at age 87 on Sept. 18, prompting the Big 3 cable networks to invoke wall-to-wall coverage. The indefatigable Ginsburg, who had survived bouts with cancer four times, was a modern-day heroine for many.

And there’s that irreverent nickname.

Notorious RBG is a spin-off of Notorious B.I.G., the nickname for a popular New York rapper called Biggie Smalls.  By the way, both Notorious Ones were from Brooklyn.

Said 83-year-old professor Jane Allyn Piliavin to InsideSources: “All academically minded women who are thinking people absolutely revere her.” Dr. Piliavin teaches a class in the sociology of sports, a male-dominated academic genre, at the University of Wisconsin in Madison.

During Ginsburg’s panel that day at George Washington, moderator Nina Totenberg, legal affairs correspondent for NPR, popped THE QUESTION. How much longer?

Ginsburg told us: “I have said many times that I will do this job as long as I can do it full steam. And when I can’t, I will step down.”

Remember, prominent Democrats and liberals tried to cajole RBG into retiring during the second term of Barack Obama’s administration. That way, Obama could replace her with a liked-minded liberal nominee for the Court. And maintain that ideological influence for another generation.

But Ginsburg said thanks but no thanks.

Like Thurgood Marshall, Ginsburg applied her craft as a civil rights attorney before joining the Supremes. Marshall was black and represented the NAACP; Ginsburg was female and Jewish and was associated with the American Civil Liberties Union.

In 1954, Marshall won Brown v. Board of Education before the Supreme Court, a case that essentially struck down legal segregation in the school system.

In 1975, Ginsburg presented her arguments in the Weinberger v. Wiesenfeld case before the High Court. In that case, she represented Stephen Wiesenfeld, whose wife died during childbirth.

Remember, the Social Security Act was signed into law in 1935, during the President Franklin D. Roosevelt era when most women didn’t work outside of the home and husbands were assigned as the sole breadwinners. Section “402(g)” of the SSA stated that survivor benefits were granted to widows only, not widowers.

Ginsburg’s argument on behalf of Wiesenfeld was two-fold: That men could be sole caregivers, too, and that by not being able to accept a wife’s Social Security, those benefits accumulated by women in effect were being devalued, thereby creating gender inequality.

The guy who appointed Ginsburg to the Supreme Court in 1993, former President Bill Clinton, called her “disarmingly straight-forward.”

Ryan Park knows first-hand, as he once served as RBG’s law clerk at the Supreme Court. In fact, the Wiesenfeld case affected Park’s entire family.

Just read his first-person essay headlined “What Ruth Bader Ginsburg Taught Me About Being a Stay-at-Home Dad,” published in The Atlantic magazine five years ago.

Park, in that essay, referred to RBG as “The Boss” from his clerk tenure; he also noted her magnanimous side in that all six cases she argued before the Supreme Court included male plaintiffs, and in four, her only client was a man.

Last year, at the annual National Book Festival on Labor Day Weekend 2019, Ginsburg spoke before an audience of about 4,000 in a huge convention ballroom — replete with a standing ovation as she walked onto the dais and again at the end.

Ginsburg didn’t waste any time that morning as she talked health from the beginning: “How am I feeling? Well, first, this audience can see that I am alive, and I am on my way to being very well.”

No one else packed the venue like her on that day.

One woman in the RBG line said she flew from Boston to Washington the day before just to see Ginsburg. For many attendees, that appearance was the first — and last — time they would see Ginsburg in person.

Soon after the announcement of RBG’S death, thousands of mourners and admirers flocked to the Supreme Court building. One of them was Alexandra Owens, a black woman who, coincidentally, turned 30 years old the day of Ginsburg’s death.

While walking her dog amidst a mixture of flowers, photos, placards, thank-you notes, dolls, candles, music and television cameras at RBG’s makeshift shrine near the Court’s steps, Owens, a marketing and events manager, told InsideSources: “Her fight for gender equity benefits every working woman in the country and their families. Not just women but everyone.”

One last note: Remember Stephen Wiesenfeld, the guy whom Ginsburg represented back in the ‘70s during that widower’s rights case. Well, he remarried at age 71 in 2014 after 42 years of single life.