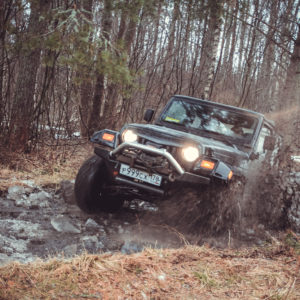 The Real SUV We Can’t Have

Nissan just announced a new SUV it is not going to sell here.

It’s called the Terra — and the Chinese (and other foreign markets) will get it beginning next spring. Nissan’s Ashwani Gupta says there is growing demand in China for “go anywhere SUVs built like the rugged SUVs of old,” which apparently are no longer in demand here.

This, of course, is claptrap. There is plenty of demand.

It is becoming extremely difficult to sell “go anywhere SUVs built like the rugged SUVs of old” because they are heavy, and heavy means big engines and that means a hearty appetite for gas.

This, however, isn’t a problem for the people who buy such vehicles; they are — presumably — OK with paying more for gas in exchange for the ruggedness and go-anywhere capabilities. Else they would not buy them.

Just as people sometimes buy a bigger house rather than a small apartment, knowing the carrying cost is higher. So what? It’s their choice. And more to the point, it is their money paying the mortgage and the utilities. Just as the SUV buyer’s money — not the government’s money or anyone else’s money — is paying for the fuel that goes in the tank.

The market takes care of itself.

If a thing is burdensomely expensive for natural (market) reasons, then that thing becomes rare as a commodity for just that reason. But never mind. Uncle Sam — acting in loco parentis — believes we are using “too much” gas.

Medium-small SUVs under $30,000 like the soon-to-be-here (well, soon-to-be-there) 2019 Terra are all but extinct in the United States.

We get crossover SUVs — which aren’t really SUVs because they are basically just jacked-up cars styled to look like SUVs. They are defined by not having rugged underthings, such as a four-wheel-drive system with a two-speed transfer case and low range gearing. They have all-wheel-drive (without the transfer case and low-range gearing) meant for light snow on paved roads; maybe wet grass.

Most of all, they are defined by not having their drivetrains and suspensions cradled by rugged and so heavy steel frames, onto which their bodies are bolted —as real SUVs do.

Instead they have car-ish unibodies. Frame and body welded together. It’s much lighter — which makes it feasible to use small engines in these things. Which in turn means they use less less gas.

But they are much less rugged — and you can’t “go anywhere” in these things — as a result.

It is also harder — and more expensive — to repair these unibodied crossovers when they are damaged. Including in particular lightly damaged, as occurs when a fender is bent.

You can unbolt most of the exterior sheetmetal bolted to the frame of a body-on-frame SUV. You have to cut — and weld — most of the panels on a unibody crossover if it gets bent.

Also, the body of a body-on-frame SUV isn’t structural; if you hit a deer, you bend a fender, not the frame.

Because of this design difference, the real-deal SUV is much more able to take a hit without taking functional damage. If the frame’s not bent — and it is hard to bend the girder-like frame of a body-on-frame SUV — the thing isn’t broken. Just bruised. You can still drive it with a crinkled fender or a smashed-in grill. The damage is cosmetic. But if you bend the frame of a unibodied crossover, the thing is no longer drivable.

At least, it’s no longer safe to drive.

It’ll pull to one side, handle like a drunk staggers down the street. Not good — and not cheap to fix, either. And not fixable by you. It takes frame-straightening equipment and welding. With a body-on-frame SUV, it takes a come-along.

If you don’t know what that is, you probably don’t know why SUVs differ from crossovers. A come-along is a heavy strap with a ratcheting mechanism. One end wrapped around a big tree. Hook the other to the bent fender. Now, pull it back into shape — more or less. Or just put the transmission in reverse and back up.

It’s not body shop perfect, but its serviceable — and doable by you, for free.

Real SUVs also last longer because they are built tougher. A V8 that makes power (and torque) by dint of displacement and without much effort is an engine that will almost always outlast a turbocharged four that’s subjected to greater stress (being pressurized) and which has to work harder, more often, just to keep up.

And, of course, rust.

So long as the frame isn’t rusted, the body of the body-on-frame SUV is both expendable and repairable. The frame will rust through, eventually. Just as a railroad track will eventually rust into dust. But the thickness of the metal makes that a long-term proposition. The much thinner frame of a unibody rusts sooner, another hidden cost of Uncle Sam’s interferences.

The question is, why do we allow Uncle Sam to interfere?

This isn’t a criminal matter. No one is victimized by someone else’s decision to spend his money on a “rugged” SUV — or the gas that goes in its tank.

It’s very interesting that so few people seem to object to the fact that the government is now in the business of punishing people who’ve not harmed anyone but only on account of some decision of theirs that others do not like.

And that’s something even the Chinese aren’t doing.