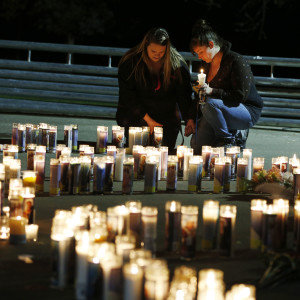 Meriah Calvert, left, of Roseburg, Ore., and an unidentified woman pray by candles spelling out the initials for Umpqua Community College after a candlelight vigil Thursday, Oct. 1, 2015, in Roseburg, Ore. A man opened fire at the school before dying in a shootout with police. (AP Photo/John Locher)
[IS] Opinions

Realism and Utopianism in the Gun Debate

After an atrocity like the shootings at Umpqua Community College in Roseburg, Oregon, what’s needed is hard-headed realism, not pie-in-the-sky utopianism. Unfortunately we always get more of the latter than the former.

That a person could walk into a roomful of innocent people, open fire, and kill in cold blood is beyond almost anyone’s imagination. We naturally wonder what “causes” someone to do that and what could prevent it. But the search for solutions soon reaches a fork in the road: one branch represents logical thinking, the other mere wishful “thinking” with no rational connection to the problem at hand.

When realists point out that human action has reasons (complex motivations) not causes, that an open society could never guarantee that mass shootings won’t occur, and that the best we can do is allow people to take responsibility for their own self-defense, the utopians stamp their feet, demanding ill-defined direct action. Gun-control advocate Rosie O’Donnell was once asked whether the freedom to carry concealed handguns might mitigate mass shootings; she responded, “I don’t want to arm everyone. I want to take the guns away from the bad guys.”

So would we all. But must innocent people wait until O’Donnell’s wish comes true? What should they do in the meantime?

Here’s what utopians ignore: a society in which bad people cannot obtain guns is not on the menu. It would be nice if that alternative were open to us, but it is not and it never will be.

So like it or not, we must choose among the available alternatives. What’s the point in demanding the impossible? As economist Thomas Sowell once said, there are no solutions; there are only trade-offs. You need to make sure that a purported solution isn’t worse than the problem. Mature thinking recognizes that this maxim applies to the problem of mass shootings.

Utopians believe, for example, that expanded, “universal,” background checks would prevent mass shootings. Never mind that nearly all the recent shooters passed background checks, including the killer in Oregon. That’s just the beginning of the problems with this alleged solution. Adam Lanza, the Sandy Hook shooter, took guns from his mother, who owned them legally. How would expanded background checks have prevented that horrific crime? Should background checks include gun buyers’ children?

We certainly cannot expect background checks to keep guns out of the hands of people who buy them in the black market or who steal them (or print them on a 3-D printer). A law requiring background checks for private sales at gun shows would only drive the targeted sales to other, less-visible venues. People who want guns for immoral purposes will get them.

In other words, there’s no such thing as universal background checks. To suggest otherwise is to create a false sense of security, which is worse than no sense of security at all. President Obama’s favorite “common-sense gun-safety law” would have made no difference in the recent cases. So why do utopians trot out this pseudo-solution each time? And why do they intimate that opponents know it would work but oppose it anyway? Utopians apparently find it impossible to presume good faith in those with whom they disagree. Too bad, for it makes rational conversation impossible.

Similar criticisms can be leveled at other utopian proposals, such as liability for dealers who sell guns to people who later commit crimes. Even if this measure were to scare all legitimate gun dealers out of business (which may be the intent), it would not stop mass murder. With at least 300 million guns in the United States, there will be no shortage in illegal channels, where anonymous sellers who already break the law will not be concerned about being sued.

While the realists’ proposal to allow well-intentioned people to carry concealed handguns to class, church, theater, and workplace would hardly prevent or limit all mass shootings, it undoubtedly would help. Utopians object that an armed defender might accidentally shoot an innocent person. That’s obviously true, but that possibility has to be contrasted with the certainty of what will happen when the person bent on mass murder is the only one with a gun. Utopia is not an option.

Sheldon Richman is a Research Fellow at The Independent Institute (independent.org), which is based in Oakland, CA.