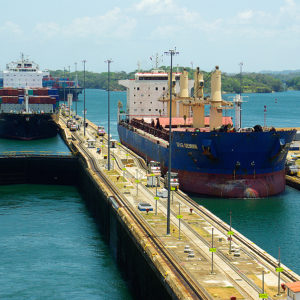 Rediscovering America: A Quiz on the Panama Canal

The quiz below, from the Ashbrook Center at Ashland University, Ashland, Ohio, provides an opportunity for you to test your knowledge of the Panama Canal.

1. Which country first attempted, but ultimately failed, to build a canal across Panama in the 1880s?

2. In what year did the United States begin constructing the Panama Canal and how many years did it take?

3. In what year was ownership of the Panama Canal fully transferred from the United States to Panama?

4. There is controversy over which ship first traversed the Panama Canal.  Which of the following ships isn’t included in the controversy?

5. At the time negotiations began on building the canal, the Isthmus of Panama was not owned by Panama, but by which country?

6. Which U.S. president was responsible for turning the Panama Canal over to Panama?

7. Which U.S. president said: “My impression about the Panama Canal is that the great revolution it is going to introduce in the trade of the world is in the trade between the east and the west coast of the United States.”

8. A major expansion of the Panama Canal was completed in 2016, enabling larger container ships to traverse the canal. How much more cargo is one ship able to bring through the canal than before the expansion?

A. Twice as much

B. Three times as much

C. Four times as much

9. Approximately how many workers died of injury and disease during the construction of the Panama Canal?

10. Which of the following canals is the longest in the world?

Patrick Maloney is deputy director of the Ashbrook Center at Ashland University, Ashland, Ohio. He wrote this for InsideSources.com.