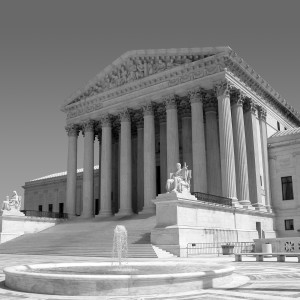 Rediscovering America: A Quiz on the Supreme Court

The U.S. Supreme Court has played a large role in U.S. history, at times reflecting the mass sentiment of the era and at other times disregarding popular views to extend rights to our citizens. The court, which begins its next term on October 1, has been much in the news lately.

The quiz below, from the Ashbrook Center at Ashland University in Ohio, provides an opportunity for you to test your knowledge of the court and several of its landmark decisions.

1. Who was the first chief justice of the Supreme Court?

2. Which U.S. president later served as chief justice of the Supreme Court?

3. Which article of the Constitution established a Supreme Court?

4. The Judiciary Act of 1789 divided the United States into 13 judicial districts and set the number of Supreme Court Justices, including the chief justice, at what number?

A. The right to a trial by jury

B. That evidence obtained unconstitutionally cannot be used in court

C. That suspects must be advised of their rights prior to questioning

D. That defendants have the right to an attorney even if they can’t afford one

6. What key Supreme Court case found “that in the field of public education the doctrine of ‘separate but equal’ has no place”?

C. Brown v. Board of Education of Topeka

7. The Supreme Court initially met in what city?

8. Who is the most recent woman to be appointed to the Supreme Court?

9. Who was the longest-serving justice in court history and how long did he serve?

A. John Marshall for 34 years

B. Anthony Kennedy for 30 years

A. That the court can declare an executive action or a law unconstitutional

B. That the court has jurisdiction in all cases involving disputes between two states

C. That the court has original jurisdiction in all cases involved ambassadors

D. That the court alone decides which cases it will review