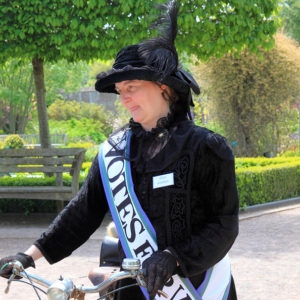 One hundred years ago, on June 4, 1919, the U.S. Congress passed a joint resolution in support of a 19th Amendment to the Constitution, which would give women the right to vote. The resolution was sent to the states and eventually was ratified in August 1920.

The quiz below, from the Ashbrook Center at Ashland University, Ashland, Ohio, provides an opportunity for you to test your knowledge of women’s suffrage.

1. Although women would not win the vote nationally until the 20th century, from 1776-1807 single women who met property qualifications were eligible to vote under the constitution of which state?

2. The first national convention for women’s rights was held in 1848. In what city was it held?

3. Who was president of the United States when the 19th Amendment was ratified?

4. How many states had granted women the right to vote in all state elections prior to ratification of the 19th Amendment?

5. How many states allowed women to vote in some, but not all, elections prior to the 19th Amendment’s ratification?

6. Which state was the 36th state to vote in favor of the 19th Amendment, providing the three-fourths’ majority necessary for the amendment to become part of the Constitution?

A. Susan B. Anthony

8. Which of the following women ran for president of the United States 48 years before the 19th Amendment was ratified?

9. In 1917, members of the National Woman’s Party began protesting outside the White House in support of the 19th Amendment. What was the nickname of this group of women protesters?

B. Daughters of the American Revolution

C. Mothers of the Movement

10. Women were able to vote in many other countries before they were granted the franchise here. Which of the following countries had not granted women this right before the 19th Amendment was ratified?

Sarah Morgan Smith is a fellow at the Ashbrook Center and editor of Ashbrook’s forthcoming compendium “Race, Gender, Equality, and Civil Rights in America: Core Documents.”