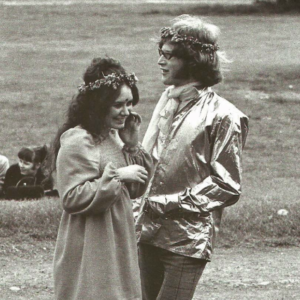 Rediscovering America: A Quiz on Woodstock and the 1960s Counterculture

August 15 marks the 50th anniversary of “An Aquarian Experience: 3 Days of Peace and Music,” which would eventually be known just as Woodstock. It is one of the best-known events of the counterculture movement, which began in the 1960s in reaction to the traditional social norms of the 1950s and the political climate stemming from the civil rights movement and Vietnam conflict.

The quiz below, from the Ashbrook Center at Ashland University in Ashland, Ohio, provides an opportunity for you to test your knowledge of Woodstock and the social unrest and experimentation that took place during this era.

1. In what town did the Woodstock event take place?

2. Which of the following bands and artists did not perform at Woodstock?

3. Which song was not sung at Woodstock?

B. “The Star-Spangled Banner”

C. “We Shall Overcome”

4. What is the Hog Farm, which played a role in Woodstock?

B. Commune of hippies

5. Which prominent figure of the time said: “There is absolutely no greater high than challenging the power structure as a nobody, giving it your all, and winning!”

6. Which of the following slogans was not used during the 1960s to urge nonviolence?

A. Give Peace a Chance

B. Make Love, Not War

D. No War but Class War

7. Which of the following did not take place the same year as Woodstock?

B. Summer of Love

8. Who was president of the United States when Woodstock took place?

9. What was the most famous neighborhood associated with the counterculture?

B. The French Quarter

10. The “hippies” of the 1960s were involved in developing the environmental movement.  The first Earth Day took place in what year?

John Moser is professor of history at Ashland University and co-chair of the Ashbrook Center’s Master of Arts in American History and Government program for teachers. He wrote this for InsideSources.com.