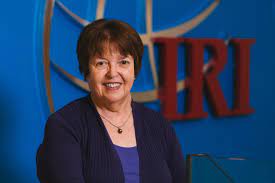 Reflecting on the Life of a Woman Champion of Democracy

Sometimes it takes the passing of an extraordinary individual to help us realize what is truly important in this world. Over the Thanksgiving holiday, we lost a champion of freedom and democracy, Judy Van Rest, a woman whose dedication led to women around the globe becoming empowered to participate in civic and political life in their countries.

Let me first tell you a little about Judy, who was the executive vice president of the International Republican Institute (IRI) and founder of the Women’s Democracy Network (WDN). Judy worked tirelessly and inspired others to be champions of liberty for all people. What drove Judy was the understanding that to achieve open markets and free people worldwide, a person must have the sensitivity to understand the challenges women face. She was known to say, “We need to help women believe they can take the first step. Once that happens, get out of the way!” Her leadership led to programs built around empowering women and ensuring that when women were given a seat at the table, they were provided with the tools to succeed.

In the United States, we are blessed to live in a great democracy in which we enjoy the luxury of freedom of movement combined with the ability to pass what we have built on to our children, nieces, and nephews, enabling boys and girls to achieve their destiny. At a basic level, there is nothing that prohibits any of us from picking up the mantle of leadership to make a difference and positively impact the lives of others. Daily, we are exposed to free-flowing ideas which allow us to connect with others’ unique and diverse perspectives so that we can arrive at the best possible solutions to the many challenges before us today and down the road. The richness of our debate can be seen in the diversity of experience and opinion of emerging national leaders, from Stacey Abrams to Kristi Noem.

John F. Kennedy inspired a generation in his inaugural address when he said, “Ask not what your country can do for you…” Ronald Reagan spoke of the need to fight for, protect, and hand freedom over to the next generation.

Through the work of organizations like Freedom House, to the Milken Institute’s investment in the American Dream Project, many of us are actively analyzing how we reach our potential and benchmark our governance against the original ideals of the Constitution, and the impact of changes in our system on other democracies worldwide.

Threaded throughout these efforts are the active voices of a core group of women diligently fighting for the right of other women to achieve their destiny through participation in governance and commerce—the right to inherit the land they work, the right to vote, and the right to gain personal independence through open markets. Since the fall of the Berlin Wall, these women have aligned with IRI, the National Democratic Institute (NDI), and Vital Voices to maintain a global network of women who make things happen on behalf of other women. The strength of their voices was heard during the fall of Afghanistan as women across the political spectrum in media, politics, and human rights advocacy elevated the plight of the women and took active measures to support their peers. Those conversations are now growing as women around the world question the “disappearance” of Chinese tennis star, Peng Shuai. However, amidst this turmoil, we are saddened to lose one of the most powerful, but understated leaders in the women’s pro-democracy movement, and we honor her today.

Judy’s sensitivity to the challenges women face could also be called empathy. Empathy is a quality that receives much discussion but is little understood. Seeing the world through someone else’s point of view and recognizing intricate dynamics that affect an individual’s ability to make decisions within the environment in which they find themselves is one of the greatest talents of great leaders.  As we mentor our future generations—those who will be the guardians of freedom and democracy, let us commit in Judy’s memory to spend the time listening and understanding at a granular level the complexities of other people’s lives, so that we can create greater opportunities, because no democracy can survive without the full participation of women.

As 2021 comes to a close and we reflect on those we’ve lost—among them, Colin Powell, Bob Dole, and Judy Van Rest, we treasure what we learned from these statespeople who reached across the political divide to bring graciousness and respect to our debates with a focus on liberty and democracy for everyone.

Lisa Gable is a former CEO, U.S. ambassador, U.N. delegate and author of “Turnaround -- How to Change Course When Things Are Going South.” She wrote this for InsideSources.com.