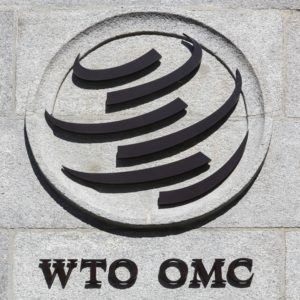 Reforming the World Trade Organization and the Global Subsidies It Encourages

The top trade officials from the major industrialized nations met recently to discuss a nettlesome and costly problem that is stifling international trade and damaging U.S. industries — how to reform the lumbering and ineffective World Trade Organization.

At the conclusion of their meeting, the trade ministers of the so-called G-7 nations, which includes the U.S., issued a joint statement calling “for the start of negotiations to develop stronger international rules on market-distorting industrial subsidies and trade-distorting actions by state enterprises.”

Liz Truss, Britain’s trade minister and current president of the G-7, captured the frustration of many nations at the slow and tired pace of reforms at the WTO. “It really is now or never for the World Trade Organization,” she said.

The WTO trumpets its lofty mission “to ensure that trade flows as smoothly, predictably and freely as possible.” But, as Truss suggests, the reality is far different.

Just how poorly the WTO performs is underscored by its failure to cajole member states to play by the rules they all agreed to when it comes to subsidies.

Member states must submit annual subsidy notifications to the WTO, the idea being that full transparency is a precursor to freer trade and that revelation of subsidies allows other states to seek remedies.

In other words, member nations going back at least six years have failed to alert trading partners to their subsidies, thereby unfairly allowing governments to prop up pet domestic industries. That is the antithesis of free trade, which will remain as elusive as Sasquatch if nations can hide their subsidies for years on end and the WTO resorts to nothing more than finger-wagging.

In lieu of any meaningful action by the WTO, the U.S. government’s response to foreign sugar subsidies has been interest-bearing loans to U.S. farmers and import quotas to protect U.S. consumers and farmers from a glut of subsidized sugar, thus operating without taxpayer cost. It is not the ideal response from a free-market perspective, but the breadth of foreign subsidies – and complicity or ineptitude of the WTO — leave little choice.

The Biden administration is promising to join the push for WTO reforms. But reforms alone won’t solve the vast sugar subsidy problem, nor would unilateral action by the U.S. Instead, the U.S. should press for meaningful reforms while also advocating for a so-called zero-for-zero policy. This approach would eliminate U.S. sugar quotas – but only in exchange for an end to foreign sugar subsidies. Such reciprocity would allow price to be based on actual costs, not twisted out of shape by government tariffs and subsidies.

Free trade on sugar will only happen when there is a viable international organization to enforce it. Until that day, the WTO will well deserve its reputation as damaging and costly.