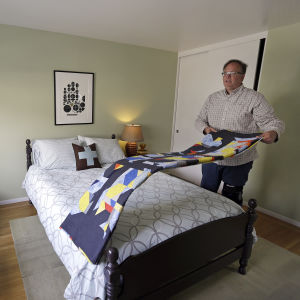 In this Friday, Oct. 16, 2015, photo, Bruce Bennett folds a blanket in a room that he makes available to rent in his home in San Francisco. Bennett and his husband, Lawrence Gordon, have been renting out one of their three bedrooms since February 2014. Some in the city where the company was founded are backing a Nov. 3 ballot measure that would limit how long a private home can be rented out. (AP Photo/Ben Margot)
[IS] Opinions

Regulating Your Neighbors for Fun and Profit

Airbnb has just avoided death by regulation in the city of its birth. This month San Francisco voters soundly defeated a ballot measure that would have placed arbitrary limits on what a person can do with his or her home. Proposition F—known colloquially as the “Airbnb Initiative”—would have significantly restricted a resident’s ability to offer his or her residence as a short-term housing rental by creating considerable bureaucratic, legal, and social deterrents.

The proposal would have tasked San Francisco’s Planning Department with approving and policing short-term rental units. Alarmingly, it would have also deputized neighbors and housing organizations—like the San Francisco Tenants Union—to file private action lawsuits and recover fines of up to $1,000 per day against people whom they suspected of breaking this law, even if the Planning Department had determined there was no violation!

To publicly identify these mavericks, the Planning Department would have been required to send out letters informing all neighbors and “interested parties” that a housing unit had been approved to offer short-term rentals. As if that were not enough, the proposal would have obligated the Planning Department to place a sign on the property, proclaiming the resident’s short-term rental shame for all to see. Nathaniel Hawthorne might have dubbed them “The Scarlet Renters.”

What was the reasoning behind the ballot measure to restrict home rentals in San Francisco? Proponents claim that short-term rentals reduce the number of available apartments, driving up the cost of housing. The city is in the throes of an ever-worsening housing affordability crisis, but this is caused primarily by the city’s own severe rent controls and land use regulations. In fact, voters also defeated Proposition I, which would have added to the problem by creating even more restrictions on the construction of new housing.

A recent study by Sanford Ikeda and Emily Washington of the Mercatus Center found that land use regulations are a key factor in driving up the cost of housing. This tends to hurt poorer people more, since they spend a higher proportion of their income on housing.

Ironically, short-term rentals mitigate San Francisco’s high cost of living by allowing low-income households and retired empty-nesters to rent out their spare rooms for extra cash. In fact, Airbnb was created for that exact reason. The company’s founders needed help making ends meet and came up with the idea of renting out their living room as an extra bedroom using air mattresses—hence the name.

Having to ask a government regulator for permission is bad enough, but having to ask your neighbor is downright strange. Proposition F was an admittedly candid attempt to crush the short-term housing market. The restrictions, bureaucracy, penalties, and potential for unmerited lawsuits would have created insurmountable barriers to entry and fostered a climate of fear.

It would have prevented city residents from engaging in voluntary, mutually beneficial interactions with tourists and business travelers. It’s good that it was rejected, but it’s still scary that 60,000 San Franciscans thought they had the right to regulate their neighbors.