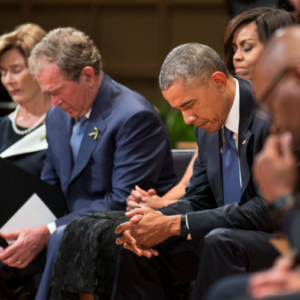 At a memorial service honoring the Dallas police officers who were slain after the killing of two black Americans by white officers, President Obama called for unity: “We turn on the TV or surf the internet, and we can watch positions harden and lines drawn and people retreat to their respective corners. … I’m here to insist that we are not as divided as we seem.”

On some level, of course, the president is right. Few Americans have much patience for deadly force, especially when it appears to be driven by racism on the one hand, and responsive vigilantism on the other.

Be that as it may, we do find ourselves at a crossroads. Police have used racially-tinged force, most recently against Alton Sterling and Philando Castile, who were killed within a day of each other. Former Army reservist Micah Johnson answered that force in Dallas, as did former Marine Gavin Long in Baton Rouge — the two killing a total of eight police officers.

We find ourselves at a crossroads because both sides in the political debate over police use of deadly force are actually involved in a much larger argument, and they seem not to realize the ramifications of their respective positions. And this has led to a perfect storm where state-sanctioned use of violence is concerned.

The left stresses the need for government regulation in virtually every aspect of American life, utterly failing to realize that every new law and regulation increases the power of the police state by definition. When the call is for more government action to address literally every social ill, police power is the logical culmination of that call. As Yale law professor Stephen L. Carter explains, “On the opening day of law school, I always counsel my first-year students never to support a law they are not willing to kill to enforce.”

The right, not to be outdone, often proposes its share of regulation too, if largely in the social realm. In so doing, conservatives implicitly call for the expansion of the very state power they explicitly claim to want to counteract. In addition to increasing police power, conservatives seem almost congenitally incapable of understanding that power brings with it attendant difficulties to which they are seemingly blind. Police, for the American right, are by definition heroes. And heroes can do no wrong, even when they kill.

What we are left with is one group of people who honestly believe the power of the state can answer virtually all of our problems, but who are deeply suspicious of the police, the very people charged with enforcing the very regulation they want, and another who want some kinds of regulation, but who cannot fathom that the police might cause a problem at all.

Every time we look to government to pass a law of any kind, we give it license to use violence. Liberals asked government to discourage smoking, so policymakers imposed high taxes on cigarettes. This led to the police killing of Eric Garner, when he was violently arrested for selling untaxed cigarettes. Liberals asked government to restrict people’s access to guns. This lead to the police killing of 12-year-old Tamir Rice as he carried a toy gun through town. Conservatives saw to it that these same police were outfitted in military gear and shielded from the responsibility of their actions.