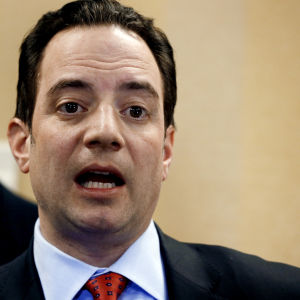 Reince Priebus Calls on Trump to Change His Tone, Not His Agenda

To hear a handful of national news outlets tell it, the headline out of Friday’s Politico interview with Reince Priebus was his defense of Donald Trump’s taco bowl posting on Cinco de Mayo Thursday — the latest clickable, shareable shiny object from the presumptive Republican presidential nominee and master of media manipulation, embraced by a political press that all too often acquiesces to him. (Say what you will about Priebus, the Republican National Committee chairman, he wasn’t wrong to chide journalists for making their work “in too many cases … all about clickbait.”)

The less clickbait-friendly takeaway from Friday was what Priebus had to say about House Speaker Paul Ryan’s reluctance to support Trump, which happens to reveal some actual substance about the chairman’s approach to their nominee.

Priebus has long said Trump needs to change his “tone” in the general election, modify his style. But Politico’s Mike Allen asked if the candidate might also need to modify any of his positions to win people like Ryan over, including his proposed temporary ban on all Muslims entering the United States.

“No,” Priebus said initially. He then went on to stress that he’s against the Muslim ban, and the party doesn’t support it, but he wasn’t sure he could convince Trump that the GOP is the “party of the open door.”

Moments later, the chairman contradicted himself and said that, yes, “I think he believes that.”

This exchange says a lot about the Republican Party in May of 2016. After seven years hoisting the flag of “True Conservatism” in opposition to liberalism from President Barack Obama and Democrats, it’s chosen a candidate who, objectively, appears untethered to any particular political ideology, and least of all the philosophy that supposedly animates the GOP.

Conservatives want government out of healthcare. Trump said “the government’s gonna pay for it.”

On issues ranging from eminent domain to Obama’s 2009 stimulus to the bank and auto bailouts, he’s opposed the right. He now says he’s “looking at” progressive policies like raising the minimum wage and “not necessarily a huge fan” of his own plan for tax cuts benefiting the wealthy.

All of this stands apart from the Muslim ban and deportation force proposals, which aren’t rooted in any American political tradition, left or right.

And that’s what makes Priebus refusing to challenge Trump so extraordinary. At a moment when it’s literally unclear what the Republican Party stands for, its own chairman has no good answer to that question.

Maybe he’s glad the press is focused on Trump’s tone — and his taco bowls.