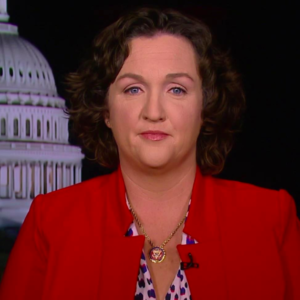 For a California progressive like Rep. Katie Porter, the story of a big bank underpaying its hardworking tellers is a natural. A report claiming that Wells Fargo’s tellers are so poorly paid they are forced to rely on public assistance is perfect for a Democrat known as the “progressive professor,” an activist who endorsed both Sen. Elizabeth Warren for president and Sen. Bernie Sanders’ Medicare for All plan.

Unfortunately for Rep. Porter, by relying on out-of-date numbers and partisan sources, she got the Wells Fargo story nearly all wrong.

“Mr. Scharf, taxpayers are funding Wells Fargo’s wages to the tune of almost $900 million per year.”

The issue of people working full time while still earning an income low enough to qualify for food stamps and other assistance is a legitimate topic for debate. But by targeting Wells Fargo, Porter picked a particularly bad example to make her case.

First, Wells Fargo is already raising its minimum wage to between $15 and $20 an hour. Median pay for its employees was more than $65,000 in 2018, almost twice the national average.

Wells Fargo also pays more in benefits for lower-income workers than most employers. According to data provided by the company, Wells Fargo pays on average 84 percent of total annual healthcare premiums for its U.S.-based employees who earn less than $40,000 a year. That works out to about $5,700 for individuals and $16,600 for families. They have a stock plan for every employee, too.

So how can a company pay more than double the federal minimum wage, offer benefits higher than the industry average, while a third of its bank tellers are on public assistance?

Because Rep. Porter’s numbers are wrong. Unfortunately, she relied on a partisan special interest group for her data, and they failed to deliver.

First, Porter’s $900 million number is for all bank tellers in America, not the employees of Wells Fargo.  And most states don’t track how many employees at a specific business receive a government benefit.

Second, the data she cites are more than a decade old, collected between 2007 and 2011 during the height of the Great Recession. These numbers are far different today, when the income growth rate has been faster for lower-wage workers than their high-wage counterparts.

Finally, even if the numbers were more current, the source itself is questionable. Porter quoted a report from the UC Berkeley IRLE, a union-funded advocacy group whose leadership openly admits they’re progressive activists promoting a political agenda. Senior Policy Advisor Jane McAlevy, for example, has publicly called for “mass strikes” as an instrument of economic policy. The Labor Center and its subsidiaries have received $1.2 million in funding from various labor unions since 2004.

Is it possible that some Wells Fargo bank tellers receive food stamps and other public assistance? Absolutely — particularly in California where a family of four with an income of $51,000 qualifies for the state’s version of SNAP (Supplemental Nutrition Assistance Program). In fact, one analysis found that members of Rep. Porter’s own staff were paid less than the Wells Fargo wages she denounced.

The debate over income inequality and making work pay for low-income Americans is real. Unfortunately, Rep. Porter’s attack on Wells Fargo was not.