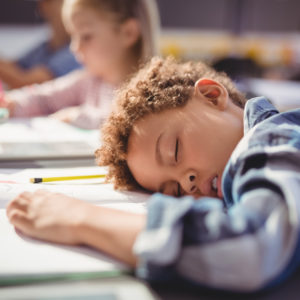 Letting school-going teenagers wake up even twenty to thirty minutes later each morning would be a multi-billion dollar boon to the economy, according to a new analysis. While some have questioned whether a later start to first period would only encourage teens to stay up later and others have balked at the cost of rearranging bus schedules, a number of medical and scientific groups are calling on educators to make the change.

The RAND corporation, a nonprofit research organization, studied the economic impact of delayed start times in a research brief released earlier this month. If every school district in the nation were to delay the start of the school day until 8:30 a.m. for its middle and high schools, the economy would add $83 billion in GDP over the next ten years, according to the researchers.

Those benefits would accrue through increased productivity and higher test scores among students, as well as a decline in car crashes attributable to drowsiness, according to the analysis. Furthermore, the authors of the report argued that their estimates are probably conservative, as the auxiliary advantages for a later start time—such as lower health care costs and improved school climates—were not included in the economic analysis.

Wendy Troxel, a clinical psychologist and a sleep expert, co-authored the RAND school start time report and spoke with InsideSources by telephone to discuss its findings. While she sympathized with the difficulty of enacting change in a rigid and decentralized education system, she argued that the case for a later start time is rooted in a solid scientific analysis.

“We have about 30 years of sleep science to show that around the time of puberty, adolescents experience a delay in their biological clock, which leads to a natural preference for teenagers to go to bed later and sleep in later. This is driven primarily by the hormone melatonin, and in adolescents we see about a 2 to 3 hour shift in the release of the hormone in the evening,” said Troxel.

With the way the school day is currently set up, (the current national average is an 8:03 a.m. start time), most teens have to get to sleep by 9 p.m. or 10 p.m. to meet daily recommended targets. Getting to bed that early is “biologically, just an impossibility,” for most teens, said Troxel. Even when they do manage to get to bed early, most teens experience their deepest and most restful sleep cycles in the early morning hours, she explained.

In addition to making the argument that teens will just stay up later if allowed to sleep in later, skeptics of later start times have expressed concerns about the strains on school transportation budgets and the impact on time allocated for extra-curricular activities. By their own analysis, the RAND researchers estimate that pushing back the start of the school day would cost an additional $1,950 per student over the course of their entire K-12 career. (Frequently, school districts stagger school start times so they can make do with fewer buses that operate when traffic is lighter).

Nevertheless, Troxel framed the debate as a public health battle against “an epidemic of adolescent sleep deprivation.” She noted that the American Academy of Pediatrics, the American Medical Association, and the Centers for Disease Control, are all in favor of an 8:30 a.m., or later, start time for teens.

“It’s quite exceptional that these major medical organizations have made policy statements about what is really an education issue. And that should tell you something about how robust the science is,” said Troxel.

The good news for those advocating later start times, such as Troxel, is that changes in national education policy may be aligning the average school district’s priorities with the benefits that come from letting students sleep in. For example, under the 2015 Every Student Succeeds Act, a number of states are taking a tougher look at chronic absence rates, in addition to the traditional school achievement and graduation rate metrics that have long been on the books.

According to Troxel, attendance rates, school climate indexes, and student outcomes all improve with the change in policy. In other words, she disagreed with those who might argue that while society at-large could benefit from later start times, schools would bear the brunt of the costs without seeing the profits.

“School districts do reap the benefits. They reap the benefits in terms of a better emotional climate of the schools, teens who are awake, alert, and showing up for school, and there is also benefit for schools when teenagers do better in class—a lot of funding is based on achievement metrics.”