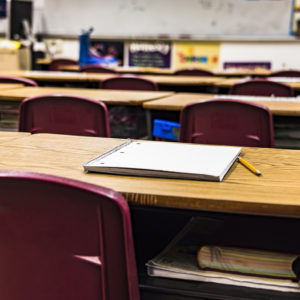 Would the expansion of publicly-funded private school choice hasten or reverse a decades-long trend of increasing de facto racial segregation in the United States’ K-12 educational system? A recently released report and an accompanying event in Washington D.C. on Thursday afternoon attacked this sensitive question in a way that drew recriminations from some on the right.

The Center for American Progress, a progressive think tank, released the issue brief “The Racist Origins of School Choice,” which examined a Virginia school district’s use of vouchers to evade the Supreme Court’s landmark 1954 Brown vs. Board of Education decision that mandated an end to the practice of segregated schools. The event at which the report was unveiled was hosted at the headquarters of the nation’s second largest teacher’s union, the American Federation of Teachers, and featured remarks from Rep. Bobby Scott, D-Va., the ranking member of the House’s education committee.

As documented in the brief, Prince Edward County’s school system in Virginia was one of the defendants in the Brown vs. Board of Education suit. (Multiple anti-discrimination lawsuits were combined by the courts in the Brown action). Once the Supreme Court had ruled against them, the school system opted to close all of its public schools rather than integrate. White students who transferred to all-white private schools then had their education publicly subsidized through tuition grants, or what are today known as vouchers. Meanwhile black families, who were barred from most of the area’s private schools, either had to cobble together their own educational accommodations, or in some cases, missed five years of formal schooling before the public system was restored. The unfair process was replicated in other local school districts around the country, particularly in the South, where much of the opposition to the Supreme Court decision was concentrated.

According to the Center for American Progress researchers, and many of the panelists at the Thursday event, racial inequities remain endemic to most, if not all, publicly funded school choice voucher programs. Essentially, the argument is that private schools are not held to the same level of accountability as traditional public schools. Therefore, while some students may benefit from a publicly funded private school education, in many cases, either through self-selection or opaque private school admissions policies, racial segregation gets worse under voucherized educational systems.

“The research basically suggests that private school vouchers will lead to more segregation, not less,” said Richard Kahlenberg, a senior fellow at the Century Foundation and a panelist at the event. “That isn’t the story that Secretary DeVos and others try to paint. Whenever we see advocates of private school choice talk, they will highlight adorable African American children who are trapped in failing [public] segregated schools, and the idea is that this will allow them to attend high quality integrated private schools… That almost never happens.”

While Kahlenberg and some of the other panelists left the door open for some types of school choice, they mostly argued that choice should be offered under the umbrella of the public system where government has more sway to regulate admissions practices. Furthermore, while Kahlenberg and other organizers of the event said multiple times that the discussion was not intended to demonize or accuse contemporary voucher proponents of racism, press releases and online responses from groups on the right expressed frustration at how their views were represented.

For example, one prominent backer of private school choice, Neal McCluskey of the Cato Institute, penned a blog post that cited polling data showing strong support of voucher programs within the black community. Furthermore, McCluskey argued that the concept of vouchers actually preceded the Brown decision, and was first broached by turn-of-the-century Catholic educators who questioned why their tax dollars were going to support public schools that taught Protestantism.

“Asserting that the origins of school choice are racist reeks of politicized guilt by association. But far more important, it ignores historical, current, and logical reality. Government, including the public schools, often forced segregation, and the public schools continue to be massively segregated,” wrote McCluskey.

Similarly, a press release issued by the Indianapolis-based school choice advocacy, EdChoice, cited a statement from the group’s CEO, Robert Enlow. “More than six decades after the Brown decision, America’s public schools are more segregated than ever. Vouchers and school choice didn’t cause that. Assigning students to schools based on where they live, not what they need, created a system where quality schools are linked to property values. Those families who can afford to move to ‘better’ districts do, and those who can’t remain in low-performing schools or have to find another way out of the ZIP-assigned structure. It’s fundamentally un-American.”

Enlow went on to argue that allowing parents to choose the best fit for their child gives them the market power to enroll in, or leave a school, based on whether or not their child’s needs are being met. The EdChoice release also cited an op-ed that appeared in The Hill, which elaborated along similar lines of reasoning.

With an avowed proponent of school choice at the helm of the Education Department in Washington, one can expect the tense public policy debate over school choice to continue. Just recently, a debate over the airing of a pro school choice documentary on PBS elicited another battle in the ongoing disagreement.