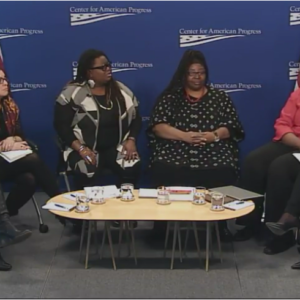 Since the introduction of the new healthcare bill, women’s health issues are back in the news. As Congress works out the details of the replacement plan, many left-leaning women’s groups are watching carefully to see how women’s health fares in the redrafting process. Although these groups are often concerned with preserving access to contraception and abortion, they also have speak about the economic opportunities available to low-income and minority women. The connection between reproductive rights and economic issues has been dubbed “reproductive justice” and was the subject of a panel discussion at the Center for American Progress on Wednesday. Representative Maxine Waters was scheduled to address the event, before being forced to cancel due to weather and travel delays.

The panelists represented a variety of groups offering family planning and healthcare options to low-income and minority women as part of a broader package of progressive goals. From the beginning of the discussion, they expressed their concerns with the Trump administration.

“Women’s health is more vulnerable than it has ever been,” said Neera Tanden, president of the Center for American Progress. “Lawmaking doesn’t get much more callous and irresponsible than we have seen in the last few weeks.”

According to the speakers, the new administration’s actions have been particularly hostile to minority women. In response, their organizations were working to promote economic options for these women, while continuing to support abortion access. The panelists called this connection reproductive justice, an amalgamation of the terms “social justice” and “reproductive rights.” What is reproductive justice? Loretta J. Ross, the co-founder of an organization dedicated to promoting reproductive justice for women of color, says that it is the principle that “nonbiological public policies have an economic impact.” That is to say, public policy affects when women, particularly minority women, choose to start families, which can later affect their career prospects and socio-economic status.

CAP’s panel was part of a larger effort to tie the abortion issue to a broader platform of progressive concerns, including a higher minimum wage, job security, and affordable housing.

“Women’s economic contributions often depend on having access to comprehensive reproductive health services, as well as to education, jobs with livable wages, and workplace supports,” write Heidi Williamson, Kate Bahn, and Jamila Taylor in a CAP report released today. “In the U.S. political and public discourse, connections between women’s health and family economic stability are often obscured, ignored, or dismissed.”

For the panel of black women, the idea of starting a family was inescapably connected to concerns about safe neighborhoods, good schools, and affordable housing. All agree that women, children, and families thrive when these things are present. During the discussion, however, the primary fear expressed by the speakers was limitation of abortion access.

For the speakers, nearly every element of the broader discussion of healthcare in the U.S. was linked to abortion. According to Monica Simpson, the executive director of a pro-reproductive justice group, reproductive justice originated in 1994, when black women came together to fight for abortion coverage in the proposed healthcare reform law.

“It’s all about expanding the analysis of reproductive rights,” she said of the broader movement that led to the creation of her organization, SisterSong.

Intersectionality was only the new phrasing used to describe an agenda that believed abortion access was a necessity for minority women. Eventually all points led back to it.

Angela Ferrell-Zabala, director of strategic partnerships at Planned Parenthood, worried about funding for her organization. She explained that Planned Parenthood does not have its own specific line item in the federal budget, but instead is funded by donations and payment for the “services” they deliver. Payments can come through private insurers, individuals, or Medicaid. To her, any Republican discussion of Planned Parenthood funding was tied to Medicaid, just as Medicaid was tied to the ability to provide abortions.

“Make no mistake, this is a dismantling and a messing with Medicaid,” she said.

The speakers at the event were willing to go to great lengths to protect pro-abortion family planning for low-income and minority women.

Ross went so far as to say that she did not agree to accept the Supreme Court’s definition of what her rights were. Instead, she planned to continue working to organize to ensure that women have access to the healthcare that they need “regardless of what the law says.”