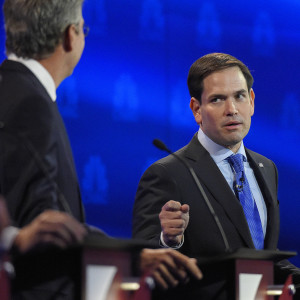 Republican Debates and the Money Game

A front-page story in the Saturday New York Times rocked the Republican presidential landscape regarding that other race: The race for the most power-packed donors.

Paul Singer, arguably the most influential Republican super-donor, apparently is placing all of his chips — and therefore greenbacks — on candidate Marco Rubio’s side of the table, the Times reported. That means other Republican candidates, such as the forlorn Jeb Bush and the bombastic Chris Christie, can stop soliciting Singer, a New York billionaire hedge-fund manager, with that colloquial mantra: Show Me the Money.

Rubio apparently won out because, in a letter disseminated to several other wealthy donors, according to The New York Times, “Mr. Singer described Mr. Rubio — who was elected to the Senate in the tea party wave but has been embraced by the party’s Washington elite — as the only candidate who can ‘navigate this complex primary process, and still be in a position to defeat’ Hillary Rodham Clinton in a general election.”

Singer’s timing had to be more than coincidental; the Times story broke mere days after the Republican debate on Oct. 28 at the University of Colorado. Rubio’s debate performance must have sealed Singer’s stamp of approval, as the Florida senator (the mentee) outmaneuvered his mentor (Jeb Bush).

Ostensibly, if front-runners Donald Trump and Ben Carson stumble, Rubio appears poised to pounce all the way to the Republican Party’s nomination by convention time next summer. The youthful, 44-year-old University of Miami law school graduate could be the Hispanic conservative archetype of Barack Obama from 2007. With Ohio Gov. John Kasich as his running mate? How does that sound for two guys from two of the most prominent electoral college states for Republicans.

Kasich, in calling for budget balancing and common-sense logic in national policy issues, appeared to be the most pragmatic of all the Republican candidates on the debate dais. Meanwhile, CNBC, which normally attracts a daily viewership of approximately 200,000, garnered 14 million viewers, in addition to a World Series-stadium load of negative criticism, in televising the debate.

But the WORD Series winner from that Wednesday night scrum in the Rocky Mountains clearly was the Republican candidates. That’s why Reince Priebus, chairman of the Republican National Committee, and the candidates shouldn’t be lambasting CNBC.

Instead, they should send the business cable network a thank-you card.

Texas Sen. Ted Cruz stated it best when he blurted during the debate, “This is not a cage match.” Then, he went off on a tirade blasting CNBC’s seemingly condescending line of questioning: “Donald Trump, are you a comic-book villain? Ben Carson, can you do math? John Kasich, will you insult two people over here? Marco Rubio, why don’t you resign? Jeb Bush, why have your numbers fallen?”

“How about talking about the substantive issues people care about?” Cruz said.

Because of the elephant-size displeasure from the candidates, as well as booing from the in-house audience directed toward the moderators, the Republicans appeared as sympathetic figures in the aftermath of CNBC’s flubs and stubs. Therefore, the Republican political machine should be clamoring for the Peacock Networks Party of CNBC, NBC, MSNBC, Telemundo and everyone else in the Comcast-NBC Universal empire to televise its debates.

The Peacock, at this point, wouldn’t dare cross the Republicans, who obviously strengthened their leverage in the debate process. We’ve all seen that popular UPS commercial with the slogan: “What can Brown do for you?”

Now, Republicans easily can crash the Peacock with this decree: “What can the Republicans do for you?” They can deliver CNBC record ratings and viewership as part of the most profitable show in the network’s history. Though CNBC may have lost outward confidence from the candidates, many viewers and some competing networks, especially Fox News Channel, the network still won in the cable television world of “Moneyball.”

Marco Rubio showcased another version of “Moneyball” during the debate, chiding Hillary Clinton, Democrats and liberal media when he jabbed: “You know, the Democrats have the ultimate Super PAC, it’s called the mainstream media.”

CNN got the Republican debate model right by adding well-known conservative talk-radio show host Hugh Hewitt to its moderator mix, alongside the network’s own Jake Tapper and Dana Bash. Other networks should employ that blueprint.

For comparison, imagine a Democratic debate featuring a prominent black candidate with multiple moderators, but none is black. Regular black citizens, as well as black-dominated media associations, would be incensed.

So why shouldn’t conservative Republicans have the same consideration of due process. Diversity isn’t just about black and white, male or female; it’s also liberal vs. conservative, libertarian vs. socialist. Therefore, NBC or ABC or CBS, in the future, should feature at least one prominent conservative writer or commentator.

No, not Rush Limbaugh; he’s too polarizing. Instead, networks should consider George Will or Cal Thomas, both syndicated columnists, or Rich Lowry, National Review magazine editor, or Mollie Hemingway, senior editor at The Federalist online news magazine.

We’ve seen that moderators can be a defining element in Republican debates.

And “Moneyball” can be a game-changer, too