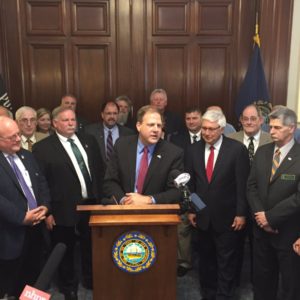 In two legislative victories for Gov. Chris Sununu, he saw Republicans unite to pass a state budget and full-day kindergarten. The New Hampshire House and Senate met Thursday for the final session of the legislative year in their respective chambers, and behind-the-scenes negotiations on the budget led to a win for the NH GOP platform. An $11.7 billion biennium budget is on its way to Sununu’s desk for his signature.

The scene was a joyous one for Sununu and Republican lawmakers in the Executive Council chambers at the State House after the budget vote. As Sununu walked into the room, cheering and applause broke out to celebrate their victory.

“Absolutely a big win, a big win for New Hampshire,” Sununu said after the vote. “People sent us to Concord to get a job done and we did it. And we did it the right way, we brought folks in and we listened and we talked, we kept working it the best we could and we came out with what I think is incredible progress for the state of New Hampshire.”

The Senate passed a committee of conference spending plan on a party-line vote of 14-9 in its Thursday morning session. About an hour later, the House passed the same budget on a roll call vote of 198-169. Only 14 Republicans voted in opposition and five Democrats supported the budget.

The margin of passage was wider than many people expected. Just a week ago, the fate of the budget in the House was uncertain, after conservatives tanked an earlier version of the budget in April. After some wheeling and dealing with Sununu and GOP Senate leadership, members of the conservative House Republican Alliance and House Freedom Caucus said while it was an imperfect budget, it was something that had some benefits for Granite Staters.

“Although the caucus as a whole is still concerned about the level of spending, there are definite benefits for the NH taxpayers,” the Freedom Caucus said in a statement. “The majority of our caucus members were able to support the budget in order to bring these benefits to our constituents.”

The business tax cuts added by the Senate were a significant factor in motivating the conservatives to vote in favor of the budget.

“There are many Republican leaders to thank for the passage of this bill — [House] Speaker [Shawn] Jasper, Senate President [Chuck] Morse, and Governor Sununu united the party in Concord and ensured passage of this Republican budget,” said NHGOP Chair Jeanie Forrester. “Republicans of all backgrounds and stripes united to pass this budget and ensure a stable and bright future for the State of New Hampshire. This shows that when Republicans are united, Republicans win and New Hampshire is better off for it.”

A companion bill that made the policy changes reflected in the budget also passed the Senate by a 14-9 margin and in the House by a vote of 212-161.

The companion bill included a phase-in of business tax cuts, elimination of the electricity consumption tax, and authorization of online lottery games. The budget will take effect on July 1, the first day of the new state fiscal year.

“Gov. Sununu’s reckless and dangerous budget will take New Hampshire’s progress and turn it into disrepair,” Buckley said. “Republicans assume New Hampshire’s problems will just fix themselves. That’s not leadership, that’s ignorance. Let’s work together to make sure we have the state government we deserve in Concord.”

Later in the day, the House and Senate also passed another of Sununu’s policy priorities: funding for full-day kindergarten. The funding starts with state dollars, but after two years, it would be funded from revenue generated by newly authorized Keno.

Over the legislative session, Sununu stuck by his campaign promise to see full-day kindergarten come to fruition. He called for it in his budget, stood by his pledge after House Republicans stripped its funding from their budget, and then applauded once the Senate revitalized it as a standalone bill. He showed his flexibility when the policy and funding levels changed each time and while the final bill was not what he originally intended, he called it a “first-step.”

It was a difficult bill for some lawmakers to stomach tying online gambling revenue to education. For Sen. Lou D’Allesandro, D-Concord, he’s been a longtime advocate of casino-style gambling in the state, but he voted against the bill since he didn’t believe the two issues should be linked.

On the opposite end, Senate Majority Leader Jeb Bradley is not a big supporter of Keno, but he voted in favor of the bill to invest more in early education.

Still, the bill made it through the legislature and is headed to Sununu’s desk, who applauded its passage and declared that he is “the first governor” to deliver a full-day kindergarten.

“The investments made today will give New Hampshire’s children a strong foundation for tomorrow’s future,” he said. “I am proud to be the first governor to deliver a real full-day kindergarten program for communities across our state, which will close the opportunity gap and provide students, regardless of their economic status, an extra step up as they enter the first grade. Full-day kindergarten is good for children and families, and a critical tool in retaining our future workforce.”