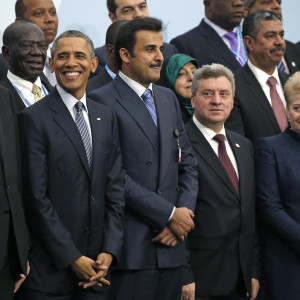 In Paris for an international summit on climate change Monday, President Barack Obama assured world leaders “the United States not only recognizes our role in creating this problem, we embrace our responsibility to do something about it.”

But on the other side of the Atlantic, Republicans were quick to contradict the American president.

“One of the dumbest statements I’ve ever heard … in the history of politics as I know it, which is pretty good, was Obama’s statement that our No. 1 problem is global warming,” GOP presidential front-runner Donald Trump said in an appearance on MSNBC.

Another GOP presidential contender, former Arkansas governor Mike Huckabee, tweaked the president on Twitter: “Obama is clueless. We need a commander-in-chief NOT a meteorologist-in-chief.”

In an op-ed, House Majority Leader Kevin McCarthy promised, “Congress will … reject commitments based on a misguided understanding of our climate, economic progress, and our needs for tomorrow.

Republican senators have already warned the president — and the world leaders he addressed Monday — not to count on the $3 billion down payment the White House has committed to the Green Climate Fund, a United Nations’ effort to help developing nations deal with the consequences of climate change.

“Any agreement with binding timetables and targets must be brought before Congress for approval,” the senators wrote. “Our constituents are worried that the pledges you are committing the United States to will strengthen foreign economies at the expense of American workers.”

The White House has not ruled out a veto if House and Senate Republicans strip funding for the administration’s climate initiatives in the omnibus spending bill that both parties hope to have on the president’s desk before Dec. 11 — the next “fiscal cliff” facing the federal government.

But Republicans may be feeling more confident of facing down Obama after the president reluctantly signed a defense spending measure last week that blocked his efforts to close Guantanamo Bay prison in Cuba.

In his remarks at the COP21 conference, being held in the French capital just weeks after the Nov. 13 terror attacks that left 130 dead, Obama said “the growing threat of climate change could define the contours of this century more dramatically than any other.

“What greater rejection of those who would tear down our world than marshaling our best efforts to save it,” Obama said.

The president, citing evidence of climate change he saw first-hand on a recent trip to Alaska, painted a sobering picture of the cost of inaction.

“Submerged countries. Abandoned cities. Fields that no longer grow. Political disruptions that trigger new conflict, and even more floods of desperate peoples seeking the sanctuary of nations not their own.”

While on the Republican campaign trail in New Hampshire, New Jersey Gov. Chris Christie called the president’s remarks prioritizing climate change over the war on terror as “insulting.”

“It’s insulting, to the position that he holds, it’s insulting even more to the responsibilities that are his, for him to be talking about this stuff right now. Rather than trying to unite the world against ISIS,” the presidential candidate said, referring to the terror group that claimed responsibility for the Paris attacks.