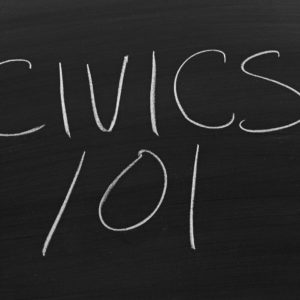 A revival for civics education in our schools, even colleges, could not come soon enough. Given the impending appointments of several Supreme Court justices during these next few years brings to light how void our populace is on the most fundamental aspects of the mechanisms and principles of American government.

According to a 2016 report by a public policy center at the University of Pennsylvania, only 26 percent of adults can identify our three branches of government and only 24 percent of our high school students are proficient in civics.

Standard guidelines learned in “teacher’s school” are to not define a term or concept by what it is not and to first “meet students where they are” when introducing new or complex topics. Today, however, when it comes to civics 101, the nature and extent of misinformation about the fundamental workings of our government is so vast, and even promulgated by elected and public officials, that one has to start the lesson with “much of what you are hearing and reading about just isn’t so.”

In 20 years of teaching health-care policy at a university, the first class or two is dedicated to reviewing some founding principles of American government. These discussions with students are important before we dig deeply into how policymaking occurs in the United States.

In years past, I could easily roll through several principles of American government with a sense of pride and explain to the students why their high school American history textbook probably had a title such as “The Birth of a Nation” or “The Grand Experiment,” and why the chapter about the Constitution probably read “The Miracle in Philadelphia.” America, by many observers’ accounts, is truly exceptional.

But that script has changed. Before I could say that as contentious as our elections have been, after it is over we generally move on as Americans. Not so anymore.

Sure, historians will tell us “how bad it was” during this or that election in the past when some candidate did not win. But today we have screams of “Not my president” and bumper stickers touting “Resist.” These curses are well beyond the light-hearted slights we often see on bumper stickers such as “somewhere in Podunk USA they are missing the village idiot.”

Next is stating that we are a nation of laws, that no person is above the law, and we are relatively law-abiding citizens; we do stop at the stop signs almost always, even when we know nobody is looking. Not so anymore. Heads of cities and states thumb their noses at laws they don’t agree with. So much for Federalism. And some local and state executives think their role is to be an ambassador when they don’t agree with the nation’s foreign policy — as if they don’t have enough to do back home.

When the discussion moves to the roles and responsibilities of the three branches of the federal government, all hands go up! (“Too easy Prof!”) Not today. We have Congress members spending more time trying to run the government and are obsessed with that man in the White House; we have to wonder what else they do all day?

Bureaucrats, not even deep in the state, spend too much time with their office election pools then working for tax-paying citizens. We see some of those in the black robes being more officious rather than officiating our laws.

Playing “Hail to the Chief” has lost its luster. My crescendo use to rise in talking to students about who gets to sit in the Oval Office. That person has had the distinction of holding the most powerful position in the world. Not today.  How do I explain to students that the former president got elected without really running anything in his past, and the current president is not considered by many to be a statesman — both important qualities, I thought, in getting this top job.

It was a thrill to add something new to their knowledge in mentioning “The Fourth Estate.” Sure, politics may be messy, and at times unsavory, but we could rely on the media to be the objective purveyors of the news and to hold everyone in check. Not anymore.  The adage “The media doesn’t tell you how to think, they tell you what to think about” is now more accurately stated “The media will tell you how to think, and if you don’t think like them there must be something seriously wrong with you.”

Explanations of the importance of sovereignty is besmirched today as racist. The route to citizenship is reduced to less than perfunctory.

Those of us working on the “return of civics” movement have our work cut out for us. The summative lesson for today’s students is not “work to keep the republic,” as Benjamin Franklin warned, it will soon be more of a history lesson explaining to the students about a  sovereign republic we once had and they missed out on.