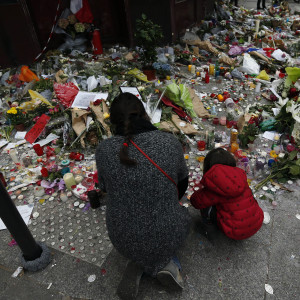 A woman and child kneel, in front of the restaurant Le Carillon, one of the establishments targeted in Friday's gun and bomb attacks, in Paris, Monday, Nov. 16, 2015. (AP Photo/Frank Augstein)
[IS] Opinions

Responding to ISIS Attacks: Revenge Might Be Sweet, but Is It Effective?

In the aftermath of the devastating and tragic attacks undertaken by ISIS in Baghdad, Beirut and Paris, public condemnation of the violence was widespread, and the military response by France was immediate. It is difficult not to be outraged by the level of violence and disregard for civilian life. But is such a military response really the most effective way to undermine ISIS, and to prevent future attacks like these?

What could possibly motivate ISIS to stage such lethal acts? One possibility is an attempt to intimidate its own population into submission and signal that it is powerful enough to stage multiple attacks against both Shia and Western enemies. But ISIS has resorted to extreme measures like beheadings for over a year, so from this perspective it is not entirely clear why it would have to reach as far as Paris.

Some scholars suggest that ISIS is engaging in a war of attrition, aimed at persuading outside powers to stop their air strikes, which have significantly weakened the group recently. If this is indeed the motive behind the recent attacks, then the military response is bound to provoke future, perhaps even more lethal attacks, as the group wants to show that it will not change course until the enemy changes its policy. This is a terrifying prospect.

I am not entirely convinced that ISIS is engaged in a war of attrition, mainly because they have proven to be better strategists than this. The group has made incredible territorial gains, and it is most likely not willing to lose the power, territory and reputation it has built over the last year — a real possibility if Western and/or Shia powers escalate military strikes.

This leaves a third possible strategic logic to the attacks in Iraq, Lebanon and France: provocation. It is a strategy beloved by al-Qaida and many other extremist groups, who count on the emotional response of their opponents, and who know that the use of indiscriminate violence against them will turn them into martyrs and heroes, boosting their ranks and recruitment potential. And if this is the case, then the escalation in military strikes, the resurgent sectarian rhetoric and the bubbling xenophobia in the West in response to the attacks is precisely what ISIS was counting on, and hoping for.

That is not to say that the military strikes might not be effective in destroying the military capabilities or even much of the leadership of the Islamic State. The fact that the group has a very clear geographic concentration in Syria makes this quite possible. But would such a destruction of capabilities count as “success”?

Over the last decade the United States has recognized that destroying the military capabilities of a group does not equate to winning “the war on terror,” it does not necessarily undermine the sources of violent extremism, and it does not always make civilians at home or abroad any safer. Furthermore, if we’ve learned anything over the last decade of counter-terrorism and counter-insurgency, it’s that clandestine organizations learn and adapt, quite often much faster than military organizations and state governments.

Not only is ISIS likely to adapt, but there are tens of other radical Islamist groups in Syria, and many other violent extremist groups that could turn even more violent and anti-Western in response to these military strikes and to domestic policies and reforms in the West that are perceived as anti-Muslim.

It is also particularly important to understand that what has fueled much of ISIS recruitment, especially among idealistic (though arguably deluded) Western youths, has been the refrain of social justice, and opposition to Assad’s brutality, to the growing injustice against the Sunnis in Iraq and to the perceived injustices against Muslims in Western countries like France.

If we take a long-term view on “success” and seek to minimize the recruiting pool for ISIS and to prevent future attacks, we cannot solely focus on military responses without a focus on justice as well. We would be remiss if we condemn the violence perpetrated by ISIS and remain silent about the unthinkable violence that Assad has inflicted on his country’s population over the past five years. Improving domestic security can work, but it can also become counterproductive if it results in profiling, and if it doesn’t prioritize human security.

Unlike what some governors in the United States might have us believe, showing hospitality toward Syrian refugees might in some ways be the best way to undermine radical groups, and to show that the United States is indeed committed to social justice and to the protection of human life.

This is particularly important because there is growing evidence that individuals who engage in terrorist groups can and do renounce violence and leave the organization if they become disillusioned with the group and with the cause. This is an incredibly important silver lining and opportunity that liberal democracies should be able to take advantage of, and which might hold more promise than a solely military approach, which we have seen fail time and again.

Ioana Emy Matesan is an assistant professor of government at Wesleyan University. Her research focuses on contentious politics in the Middle East, with a particular interest in political violence, democratization, and Islamist movements.