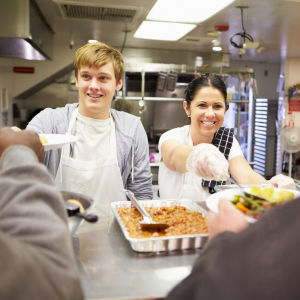 Washington D.C. was swarmed with hundreds of restaurant owners this week who met with lawmakers to discuss the issues most important to them.

The National Restaurant Association (NRA) is the largest foodservice trade association in the world with over 500,000 members. It works to represent the restaurant industry in politics and the public. The NRA Public Affairs Conference is an annual event that allows members to express their concerns directly to lawmakers.

The conference this year involved nearly 600 restaurant owners and managers from large and small businesses who met with lawmakers on Capitol Hill between April 17 and 18. They discussed issues ranging from tax reform, immigration, healthcare, and reforming federal disability laws.

“It was a very successful week,” NRA public affairs vice president Cicely Simpson told InsideSources. “We had over 300 meetings on Capitol Hill about the issues that are important to our industry. It was a very impactful couple of days for the key issues that are important to our members right now as we find ourselves in the middle of this election year.”

The NRA Public Affairs Conference attendees spent their first day listening to lawmakers and attending training sessions. They told their personal stories as restaurant owners and learned how to successfully lobby their representatives. They then spent the second-day meeting with lawmakers at their offices.

“We are very purposeful about those meetings,” Simpson said. “We appoint state captains from each delegation. The state captains help make sure that everyone has their materials, everyone understands the talking points, but also to tell their stories about their restaurants.”

The NRA Public Affairs Conference was intended to inform federal lawmakers about how the decisions they make impact their local communities and restaurants back home. The conference also included a discussion on how President Donald Trump and his administration have been doing.

Simpson believes that the meetings went well, with lawmakers expressing support for issues like restaurant depreciation. Restaurant operators can deduct the cost of construction on a 15-year depreciation schedule. The Republican tax bill from last year includes an unintentional drafting error that defaulted that period to 39 years.

The Americans with Disabilities Act (ADA) is a civil rights law that prohibits discrimination against individuals with disabilities, such as for employment. The NRA supports the law but argues that it could be improved to prevent frivolous lawsuits – like allowing business owners 120 days to fix the problem.

“It’s helpful to have constituents sitting in front of their member of Congress, talking about how important these issues are to their business back home,” Simpson said. “We got some new champions on the restaurant depreciation issue and certainly on ADA reform. We have members committed with us to solve these issues.”

“One of the things we were here to talk about were issues with the ADA,” Peter Sclafani, the co-owner and executive chef at Ruffino’s on the River in Baton Rouge, said in a statement. “It was interesting because when we met with Sen. Cassidy, he was unaware that this was going on. So, by us coming here and talking to him, we were able to educate him on something affecting our industry.”

The NRA works in other ways to advance issues important to their members besides the annual conference. Simpson notes that they’ll continue to talk with lawmakers on both the federal and local levels while following up on issues brought up during the conference. The midterm election will also be at the forefront this year.