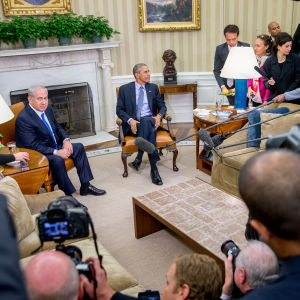 Members of the press surround President Barack Obama as he meets with Israeli Prime Minister Benjamin Netanyahu in the Oval Office of the White House in Washington, Monday, Nov. 9, 2015, as they seek to mend ties amid tensions over the Iran nuclear deal, ongoing security talks and new violence between Israelis and Palestinians. (AP Photo/Andrew Harnik)
[IS] Opinions

Sunni Muslim states watch with growing concern as their historic rivals—the Shiites and the Iranian Mullah Regime—gain momentum and expand their influence. The Iranian Revolutionary Guard, Iranian-backed Shiite Militias, Afghan Shiite Militias, Hezbollah, and Iraqi Shiite Militias physically occupy parts of Iraq, Syria and Yemen; Lebanon has been taken hostage by Hezbollah in the service of Iran; Shiite militias conduct ethnic cleansing of Sunnis in Syria (with Russian support) and in Iraq.

The Iran Nuclear Deal, signed between the U.S., the major European states, and Iran in July 2015 formally legitimized Iran’s nuclear program and positioned Iran as a leading regional superpower. Though formally expressing support for the agreement, the Arab states are furious and horrified. Their major concern, shared by Israel and Turkey, is that the lifting of sanctions on Iran and the hundreds of billions of dollars streaming to Iran’s treasury will be used to increase Iran’s influence inside the Arab states and beyond.

The Iranian aggressive expansion is taking place with the silent consent of the United States of America. Some Arab analysts argue that the current U.S. administration does not understand the Middle East. Others argue that the U.S. is actually implementing a policy which reflects a calculated, strategic change of direction stemming from the American assumption that the Arab world is a limping horse and that Iran can actually secure stability in the troubled Middle East, and can therefore be useful in successfully fighting Militant Islamic groups like ISIS, Al-Qaida, and other Sunni Militant groups. Others theorize that the U.S. deliberately encourages instability in Arab societies to justify the strengthening of its ties with Iran and, that U.S. policy is motivated by the eagerness of American and European companies to do business with Iran.

It is not surprising that U.S. policy in the Middle East is further alienating growing segments of the Sunni Muslim world. Arab leaders view President Barack Obama as irrelevant and are waiting for his second term to end.  It appears that America is extending its hand to Iran partially based upon the hope that it will make the Iranian Mullah regime moderate and become pragmatic. Reality proves, however, that this is wishful thinking.

In 1979, President Jimmy Carter welcomed the Islamic revolution in Iran, believing that the Mullah regime would become moderate.  But America’s friendly gestures were quickly met with more than sixty private U.S. citizens, military personnel, diplomatic staff, and government employees being held hostage by the Iranian Mullah regime for more than a year.

In 2016, President Obama’s extended hand towards Iran was reciprocated by the humiliating arrest of U.S. Navy personnel in the Gulf by Iran, and most recently with the reported Iranian ballistic missile test launch.

The Iranian-Arab power struggle is primarily playing out in eight arenas—Lebanon, Syria, Iraq, three islands which are occupied by Iran in the Arab (Persian) Gulf, Bahrain, Yemen, the Gaza Strip, and the Iranian nuclear program.

In the United States there are those who argue that that the Middle East is of diminishing importance to U.S. strategic interests. This argument is short-sighted and ultimately counterproductive to American national interests. The U.S. must restore its influence and leadership. One way of achieving this is through active U.S. involvement in the shaping of a new Iranian-Arab balance of power in these eight arenas.

U.S. policy in the Middle East must be based on three elements: restraining Iran’s aggressive expansion, accurately assessing the negotiables and non-negotiables of the players involved, and the willingness to respond decisively if any clearly drawn U.S. red lines are crossed.  Failing to restore the Iranian-Arab power balance will result in growing instability that will greatly undermine American influence and vital interests in the Middle East.

Avi Melamed is the Fellow of Intelligence and Middle East Affairs at the Eisenhower Institute at Gettysburg College and author of the new book, Inside the Middle East: Making Sense of the Most Dangerous and Complicated Region on Earth.