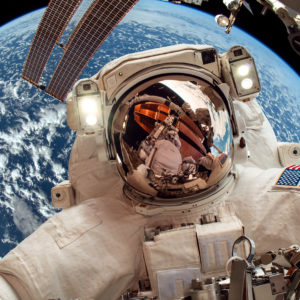 There isn’t anything particularly objectionable to the three action items listed: putting Vice President Pence in charge of the National Space Council, making it easier for commercial companies to operate in space, and working with our allies to explore the solar system.

What is much less clear is how any of these will promote space security. Even worse, the stated intent of maintaining “freedom of action” in space is usually read in defense circles as code for developing weapons in space and weapons that affect space.

Ideas behind weaponizing space crop up almost annually. These ideas are misguided at best and critically detrimental to our security at worst. Crucially, the new National Security Strategy misses the opportunity to solidify the norms of cooperation in space that have dictated behavior since the signing of the Outer Space Treaty in 1967.

Modern American life would be impossible without a wide range of space technologies. Space-based satellites connect Americans by phone to friends and relatives in distant countries, help predict dangerous weather patterns, and provide television coverage of newsworthy events around the world. Global positioning satellites not only guide American automobiles through city streets but also provide critical navigation to civilian airliners, cargo ships and oil tankers. Other satellites enable scientific research on questions ranging from deforestation and global warming to the possibility of life on other worlds and the origins of the universe.

The American military and Intelligence Community are reliant on space-based assets too. It is important to recognize that although outer space has remained a weapons-free zone, the United States has relied on satellites to enhance its military capabilities for more than 60 years. Satellites provide the U.S. military with an unrivaled ability to gather information about our adversaries and communicate that information in real time with our forces around the world.

But if U.S. space capabilities give it such a major advantage over the rest of the world, why would other nations agree to sign a treaty that would serve to secure our advantage long into the future? The answer is that other space-faring nations want to safeguard their own space assets as well. Indeed, this is the same logic that kept space weapons free during the Cold War.

Despite intensive research into anti-satellite weapons between from the 1950s through the 1980s, Soviet and American policymakers decided independently that space weapons would jeopardize their growing intelligence gathering capabilities and other space assets. Both sides greatly benefited from this outcome.

Yet in some ways the United States was lucky. Because the United States had very few spies in the Soviet Union, we depended on our satellites to a much greater extent than the Soviets did on theirs. Paradoxically, it was the decision of Soviet President Yuri Andropov to seek unilaterally a moratorium on anti-satellite weapon testing that ensured the United States would maintain its advantage in space.

It is not mere conjecture that other nations want to keep space weapons-free today. At the United Nations in 2002, the Russians and the Chinese proposed a ban on space weapons. The United States at the time rejected the offer, however, arguing that such a treaty would limit our freedom of maneuver and access to space.

Russia and China still support a ban on space weapons, as they put forward proposals to do so at the United Nations in both 2008 and 2014, but their willingness to cooperate may not last forever. Indeed, as other nations search for ways to counter U.S. power, anti-satellite weapons may become increasingly attractive.

In a situation where defense is enormously more expensive, complex and unreliable relative to offense, it is extremely unstable and thus extremely dangerous. Due to these basic facts of “space life,” keeping outer space free of weapons is in the supreme interest of the United States.

Some may worry that a treaty banning space weapons could never be verified. But it is unlikely that any nation could produce effective space weapons, including ground-based laser systems, without testing, and such tests could be observed by the same satellites that the treaty would be designed to protect.

Time-tested verification systems and checks similar to those used in the nuclear disarmament regime should be hard-coded into any treaty. These checks have so far performed well on the nuclear front and they would be more than sufficient for space weapons too.

The Trump administration tends to see international treaties and organizations as fetters with which the rest of the world seeks to constrain the United States from pursuing its interests. In the case of space weapons, a treaty would actually ensure our freedom of maneuver and make America stronger.

Here, a tiny bit of self-constraint buys enormous benefits. The last thing we need is to start unintentionally a new Cold War in space.