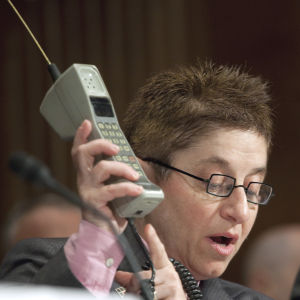 Net neutrality advocates came out in force Thursday to stump for the Federal Communications Commission’s proposed privacy rules for internet providers, including several with ties to FCC Chairman Tom Wheeler’s office, who urged the agency to vote on adoption next week.

Public Knowledge (PK), an advocacy organization that helped lead the push for the FCC’s net neutrality rules adopted last year, hosted the press call alongside representatives from the Consumer Federation of America (CFA) and New America’s Open Technology Institute (OTI), consumer protection and tech policy organizations with a link to FCC leadership through Gigi Sohn, who found and led Public Knowledge as its president and CEO before becoming a counselor in Wheeler’s office in 2013.

Those on the call pushed back against critics of the rules calling for the FCC to copy the Federal Trade Commission’s privacy rules for web services like Google and Facebook, which require users to opt-in to collection of sensitive data like Social Security numbers, financial and medical information, but only opt-out for other less-sensitive information gathered for product improvement and targeted advertising.

The FCC rules require broadband connection providers like Verizon and Comcast to get opt-in consent before collecting almost all information from consumers, though changes to the proposal last month did establish tiers of sensitivity for opt-in and opt-out consent — a concession to opponents those on the call criticized.

“Rather than assuming information is not sensitive unless it is, we think we should assume communication information is sensitive, unless it’s not,” Laura Moy, a fellow at OTI, told reporters. Moy previously worked as a staff attorney at PK.

Moy said while the FTC rules are beholden to other standards, the law backing the FCC rules — set down in Communications Act authority that gives the agency power to regulate how public utilities (only telephone companies until net neutrality reclassified internet providers) collect and use Customer Proprietary Network Information (information needed to provide service including who customers call and when) — have no requirements for tiers of sensitivity.

Providers argue the FCC’s blanket opt-in requirement to track browsing history and app usage, even when they don’t include sensitive data, will unfairly burden their ability to market new services and products to consumers based on their preferences — restrictions edge providers like Google, regulated by the FTC, don’t have.

“Our advocacy on this issue has been that all of it is sensitive,” Moy said, describing how seemingly innocuous metadata can be compiled over a broad view (which some argue providers have, though experts dispute this point) to create a detailed profile on a subscriber.

“We’re really troubled by the fact the FCC seems to have gone in this direction because we don’t think it makes any sense that there is going to be a distinction,”  said Susan Grant, privacy lead for CFA — where Sohn’s replacement at PK, Gene Kimmelman, served as legislative director.

“Things that are considered not sensitive I hope we wouldn’t be able to even fill a handful with, and that [they] would be construed very, very narrowly,” Grant said.

Joining advocates was Massachusetts Democrat Sen. Ed Markey, who sits on the Senate Commerce, Science and Transportation Committee charged with overseeing the regulator.

“Every click Americans make online paints a detailed picture of their lives,” said Markey, who’s lobbied the agency on other high-profile proposals like the recently stalled vote to mandate cable providers get rid of set-top boxes in favor of free apps.

Markey likened an internet provider’s ability to track subscriber browsing habits to Russia’s recent hack of the Democratic National Committee and the presidential campaign of Democratic nominee Hillary Clinton, saying it was the government’s job to ensure no one compromises Americans’ privacy.

The senator put on public display his own admiration for Sohn during the 2011 Public Knowledge Roast, where he literally sang her praises.

“Gigi is a public media powerhouse who packs more telecom punch per pound than any other human being on the planet,” Markey said. “Gigi relentlessly battles against media consolidation by the world’s communications colossi, but in fact, Gigi is the smartest human to terrorize a giant since David hit Goliath on the forehead.”

Wheeler scheduled a vote on the privacy proposal for the FCC’s open meeting Oct. 27.